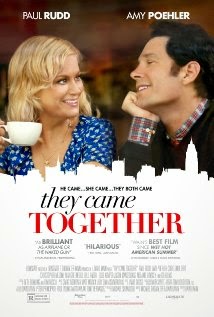 Romantic comedies continue to get made every year and almost every director and screenwriter continue to do the same things over and over again. It's not often that we get a romantic comedy that tries to do something different, let alone attempts to parody the genre. Director David Wain (Role Models) decided to bring his own brand of humor in to try and poke some fun at the genre and showcase just how dumb some romantic comedies can be.

In They Came Together, Paul Rudd and Amy Poehler play a couple on a double date as they tell their friends the story of how they met and got to where they are currently. We see it all take place in the same set ups from every romantic comedy we see on a consistent basis. From the introductions of our main characters, to the awkward first meeting, to the eventual conflict, to the reuniting of the characters. All of this is told in really silly situations that are almost too overbearing at times but does provide some good satire on the genre.

The direction David Wain chooses to go with this film works and doesn't work at the same time. While there are many funny and humorous moments and one liners there are almost just as many sequences that either don't work or have a joke that goes on for way too long. That being said the moments here that are funny really work and had me genuinely laughing. Another thing that nearly makes and breaks the film is how self aware everything can be. Being self aware can be extremely funny or can be agonizing and here it ends up being a little of both.

For something like this to really work it needs to have some competent leads. Thankfully, Paul Rudd and Amy Poehler are both great comedic actors and actually have some good chemistry together throughout the film. The film also boasts a ton of great supporting actors and cameos including Bill Hader, Ellie Kemper, Christopher Meloni, Cobie Smulders, Ed Helms and many more. Having a very game cast lifts the film up from being something that almost tries a little too hard.

Despite a good amount of shortcomings the film does boast some funny moments thanks largely in part to the performances of Paul Rudd and Amy Poehler. This is definitely not something for everyone but fans of David Wain's previous films are sure to love it.