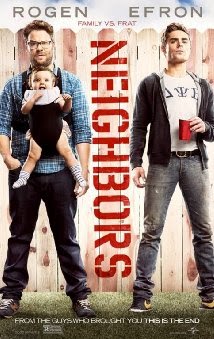 Neighbors is the latest film to star comedian Seth Rogen. Rogen tends to come out with 2 to 3 comedies a year and for the most part the majority of them I have rather enjoyed. This time around Rogen has teamed up with Zac Efron as they go head to head trying to one up each other throughout the film.

Seth Rogen and Rose Byrne play Mac and Kelly, a married couple with a new baby girl who have just moved into a great new house. Everything is fine until they have some unwelcome new neighbors move in next door. A college fraternity lead by Teddy (Zac Efron) sets up camp next to Mac and Kelly and now they fear that their baby will never sleep again. They want to approach the fraternity and let them know to keep things down but they don't want to seem like some uncool old folks. That doesn't matter anymore once they call the police on the fraternity and break the trust of Teddy which leads to a war between the college kids and the married couple as they both try to get one another to leave the neighborhood.

We've seen this type of film many times over the last few years, most of them feature Seth Rogen himself, but the filmmakers and actors are able to take a familiar brand of humor and still make it fresh. Director Nicholas Stoller has done his fair share of this kind of comedy with films like Forgetting Sarah Marshall and Get Him to the Greek making him the perfect fit for a film like this. Adding an actor like Zac Efron, a guy who has been trying his hand at comedy lately, definitely helps bring a little something more that is fun to watch as he clashes with Seth Rogen.

Thankfully, this was not a film that showed all the best parts in the trailer like I feared it might be. While the trailers were quite humorous the film as a whole keeps the laughs rolling from start to finish. There aren't many dull moments except for a couple scenes here and there and for the majority a lot of the jokes land quite well. My only complaint would be that they do fall back on some gross out humor a little too much but despite that there is plenty to enjoy throughout.

As far as performances go most of the cast does a great job. Both Rogen and Efron are hilarious and have some great chemistry together. They are a duo I would love to see again in another film together. Dave Franco continues to prove himself as a competent comedic actor providing some good laughs. This is the first film I've seen to finally give Ike Barinholtz some time to shine as he gets plenty of great lines throughout. There are a couple of wasted actors that appear such as Christopher Mintz-Plasse and Lisa Kudrow. Finally, that brings me to Rose Bryne who does give a fairly funny performance but it almost feels like she is miscast as Rogen's wife. Not sure why but it felt like her role could have been played by someone else who could have done it better.

Neighbors provides tons of laughs thanks in large part to Seth Rogen and Zac Efron. While it does go for gross out humor a little too much the film is able to overcome that by staying consistently funny and actually having a pretty humorous story.