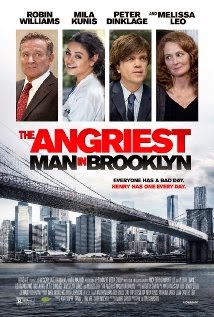 What would you do if you knew you only had 90 minutes left to live? In The Angriest Man in Brooklyn we watch as one man tries to see everyone he can before he dies. Robin Williams, in one of his final performances, stars as Henry Altmann. Henry is a very unhappy man who goes through every day just as miserable as the last. When he goes to visit his doctor Sharon Gill (Mila Kunis), who is experiencing her own rough day, Henry is told that he has a brain aneurysm. This information gets Henry even more angry than usual causing him to get very angry with Sharon which leads to her mistakenly telling him that he only has 90 minutes left to live. Despite not believing he only has an hour and a half left to live Henry sets out to make amends with some of the people in his life that he's wronged including his son, brother (Peter Dinklage) and ex-wife (Melissa Leo).

While this film does boast a talented cast the execution feels just a little flat throughout. Not only is the story not all that interesting but none of the actors involved are giving performances worth mentioning. The biggest fault of the film seems to be the direction by Phil Alden Robinson and the script written by Daniel Taplitz. Despite it not being all that interesting the story does have potential to be something worthy of seeing but the script doesn't allow for much room to get the story going down the right path. Phil Alden Robinson's direction is too weak along with the script to allow the talented cast to make anything here feel above average.

The structure of the film doesn't feel quite right either. From beginning to end both Robin Williams and Mila Kunis narrate in the third person and it feels unnecessary for them to not only be narrating but also narrating in that format. For it to be called The Angriest Man in Brooklyn and supposed to be centered on Robin Williams character it spends a little too much time following around Kunis' character. It doesn't help that the run time is just short of 90 minutes, not giving enough time to let the audience care for the characters or give enough time to the few different plot points going on.

Even though everything here feels like it could be so much better the actors involved do make a few scenes here and there fairly entertaining. This is definitely one of the weaker performances by Robin Williams but he has certainly done worse than this. Same can be said for Mila Kunis, who probably gives the best performance in the film. Melissa Leo and Peter Dinklage are nice additions to the cast who both provide a few funny moments. There are a few nice cameos as well from the likes of Richard Kind, Louis C.K. and James Earl Jones, who without a doubt has the funniest scene in the film.

All in all, The Angriest Man in Brooklyn could have been a decent little dramady but instead settles for a lot less and ends up being just worth a rental.