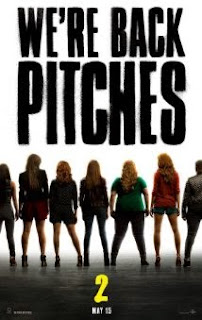 Just a few years ago we were introduced to the first Pitch Perfect. From the trailers it looked like it could be the movie version of Glee, which could be a good or bad thing, or it could just be an absolute train wreck. Surprisingly enough the film turned out to be extremely funny and went on to become a huge hit with critics and audiences. After so much success it was inevitable there would probably be a sequel which, when it comes to comedies, isn't always a good thing. Sure every once in a while you a get something like 22 Jump Street that ends up being better than the first film but that is a rare occurrence. However, Pitch Perfect 2 might just be in that same category.

This time around we continue to follow the Barden Bellas as they have become quite popular since the end of the last film. So popular in fact that they get to perform in front of the President and his wife. Unfortunately for them something goes haywire that causes Fat Amy (Rebel Wilson) to flash everyone at the event and this prevents the Bellas from performing anymore. Through a loophole in the fine print they are able to enter an international competition that no American team has ever won. So the Bellas must whip themselves into shape to take on some of the best acapella groups in the world.

Going into this film I had my reservations. The trailers looked appealing but the fact that it's a sequel, especially a comedy sequel, I certainly had my doubts. Thankfully I wasn't let down and once again we get another surprisingly entertaining film. Elizabeth Banks, who plays Gail, has taken over behind the camera as the director and she does a bang up job in her directorial debut. It also helps that the majority of the cast from the previous film is back again and everybody is on their game.

The cast was such a delight to watch in the first film and it's great to see them all back together again. All the girls in the Bellas have great chemistry together and it's fun to watch them all play off one another. We get to see some great performances too of plenty of classic songs as well as some newer ones that some might not be as familiar with, They manage to keep everything fresh without doing too many callbacks to the first film while still giving fans everything they loved about the first one.

Unfortunately there are a few drawbacks here that can't be overlooked. The film does feel a bit too long at 115 minutes. There were some scenes that could have been cut down a little and there probably could have been about 15-20 minutes cut out to save some time. Another part that felt like a little much was the character of Flo. While there are a few jokes with her that are somewhat funny all of her bits felt way too much like what they did in the first film with the character Lilly. They also continue to do the same bits with Lilly this time around too so it all just felt like too much going back and forth with those two characters. Nonetheless the gripes I had are minor and they don't derail the film from delivering on the laughs.

Pitch Perfect 2 is a welcome sequel and while it may fall just shy of topping the first film it still provides plenty of laughs, great musical performances and a few sweet moments.