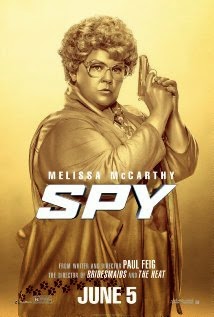 Melissa McCarthy has really blown up over the past few years after her hilarious performance in Bridesmaids. Since then she's gone on to headline a ton of different films and has started to make herself a household name. Despite having made a good deal of films in the last few years, not all of them have been winners. Last year's Tammy was a dreadful outing and 2013's Identity Thief where she starred alongside Jason Bateman was pretty rough as well. It seems that when she's paired up with the right people it can be a comedic success which was the case with The Heat which also starred Sandra Bullock and was directed by Paul Feig who just so happens to direct this film. Do McCarthy and Feig strike gold again or is this another flop on McCarthy's rise to the top?

In Spy we follow Melissa McCarthy as Susan Cooper, a CIA analyst who is the eyes and ears for super spy Bradley Fine (Jude Law). Fine is one of the best agents the CIA has to offer and with Susan guiding him along each mission they make a really solid team. However, on a mission that doesn't go too well Fine is killed in action by the ruthless Raina Boyanov (Rose Byrne) leaving Susan and the CIA devastated. Now the CIA doesn't know how to handle Raina because she has the names and faces of all the CIA's top agents making it difficult for any of them to make a move on Raina. That's when Susan steps up to the plate and volunteers herself to go undercover to stop Raina from causing a global disaster.

Don't let the trailers for this one fool you. While the trailers didn't really sell me on the film too much and they made it look like another typical Melissa McCarthy film it really is much more than that. For one the film is incredibly clever and is a great play on the spy genre. Director Paul Feig has put together a great cast here and they all are what really sell the film. Even guys like Jude Law and Jason Statham, who aren't really known for their comedic performances, show us that they can be extremely funny when given the right material. Everyone in the cast does a great job but this is McCarthy's show and she really shines here. While there are hints of some of her previous characters she approaches the role with a different attitude than we've seen from her before and she does a great job in the lead role.

On the negative side of things there wasn't much here that I didn't enjoy. Of course not every joke hits and there are a few scenes that go on a little longer than they needed. Also the big reveal toward the end you can see coming from a mile away. It does have some cliche moments but when the film is hitting the right notes it is a joy to watch and it feels like it hits more often than it misses.

Spy works as a great spoof on the espionage genre combining action with hilarious comedy. Everyone from top to bottom does a great job here, with Jason Statham giving a breakout comedic performance. Paul Feig and Melissa McCarthy have struck gold for their third pairing thus far.