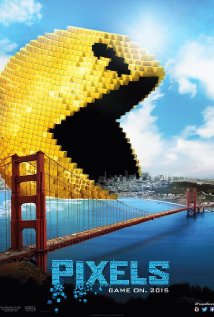 Another year goes by and here we have another big budget Adam Sandler comedy. Every time I review a Sandler film I always say the same thing, the guy is talented but he continues to make films that are so low brow with their humor that they just aren't funny. He consistently does this because he knows those types of films are what's going to make him more money. With this latest film, Pixels, the trailer actually had me pretty interested. I though hey maybe this could finally be a decent film with Sandler that will be a step above all his other bad comedies he's put out over the last 10 years. The end result has me kind of split because the film really isn't that good but it's not as bad as everyone else has made it out to be,

The basic premise here is that we follow Sandler as Sam Brenner, who as a kid was one of the best arcade game players in the country but now he works for a Geek Squad type company because he lost an arcade game championship when he was younger. After that championship took place the U,S. sent a time capsule with video feeds from the video games, among other things, into space in hopes of contacting other forms of life. Turns out a race of aliens do get a hold of the capsule but misinterpret the video games as a declaration of war.The aliens start attacking Earth in the form of the video game characters. Sam's childhood friend Cooper (Kevin James) who is now President of the United States recruits Sam to help fight off the aliens. They also recruit Ludlow (Josh Gad) and Eddie (Peter Dinklage), the winner of the championship from their childhood, in hopes of helping stop the alien attack.

First off the idea behind this is one of the better aspects of the film. Sadly the final execution is not up to par with the idea itself. With Director Chris Columbus on board it seemed like he would be able to have the film rise up above the typical Sandler fare that we're used to. In some ways he's able to do that but overall it still has too much of the vibe from Sandler's other films. This is marketed as a family film and while there are plenty of moments kids will love and enjoy there is a lot of adult humor and references that are going to go way over a lot of kid's heads. That's one of the biggest problems here is that it feels like the filmmakers don't know what kind of film they want to make and who they are making it for.

Aside from the execution another big complaint I have is that it's not really all that funny. I was able to get a few laughs here and there, mostly chuckles, but for a big budget comedy it just felt like the majority of the jokes fell flat. On the plus side the special effects worked really well and the way they were able to bring the video game characters to life was probably the best part here. The cast they were able to put together seems good on paper but nobody seems like their even slightly interested in being on screen.

The one exception to that is Peter Dinklage. Dinklage actually plays a character and shines every time he's on screen. When it comes to the likes of Sandler and Kevin James, both of them are just coasting along and doing the bare minimum when it comes to acting. Josh Gad and Michelle Monaghan are both fine in their roles but neither is really given that much to do so they just end up feeling wasted. As for other members in the cast like Brian Cox, Sean Bean and Jane Krakowski, they might as well have not even showed up to film their scenes because they are all completely wasted.

Pixels has a great idea that never is fully brought to life. While the special effects and some of the action scenes are entertaining, the acting and direction are what ultimately bring down the film.