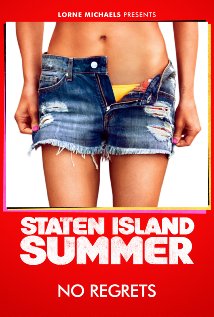 Summertime always seems to be the best time to showcase a coming of age story. That's the setting for the latest film trying to go the coming of age route and that film is Staten Island Summer. In the film we follow Danny (Graham Phillips) and Frank (Zack Pearlman), two best friends who are working as lifeguards during the summer after graduating high school. Both guys are unsure of what they want to do now that they are out of high school but they know for sure that they want to have a great summer. Summer consists of them getting into all kinds of shenanigans with some of their fellow co-workers and it all leads up to one last blow out party to end the summer on the right note.

This was a surprising little film. It was completely off my radar until I was able to catch it on Netflix and I must say that it was well worth the watch. While the film does hit many of the same beats other films like it hit and it is really cliche in a lot of parts, it was able to win me over with witty dialogue and memorable characters. To go along with the witty dialogue it is consistently funny throughout.

To me this felt like a mix between The Way Way Back and Superbad. The way Danny and Frank interacted with one another was straight out of Superbad, and it didn't help matters that Zack Pearlman sounds exactly like Jonah Hill. The whole film taking place at a local pool with a cast of colorful characters was right in line with The Way Way Back. Despite these similarities Staten Island Summer is able to stand on it's own and give you a familiar story with new characters that you actually care about. My one gripe here was the forced love story with Danny and Krystal (Ashley Greene). Both actors never really had any chemistry together and it just felt like they were trying to put them together because they had to, it never felt real.

The strongest point here are the actors and they all do some fine work. Graham Phillips and Zack Pearlman make for a great pair of friends and both look like they could go on to be some pretty competent actors. Saturday Night Live creator Lorne Michaels is a producer on the film and they didn't short on filling the cast with plenty of SNL cast members. Bobby Moynihan, Cecily Strong, Mike O'Brien, and Fred Armisen all play characters who work at the pool with Danny and Frank. Kate McKinnon and Colin Jost also have small roles here, Jost also is credited with writing the film as well. We also get some fun performances from Gina Gershon, Kate Walsh, Jim Gaffigan and Method Man.

Staten Island Summer may feel like a lot of other films that came before it, but it's able to stand on it's own with memorable characters and being consistently funny throughout.