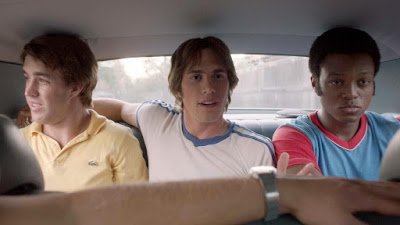 Blake Jenner stars as Jake Bradford, a freshman heading to college early to get settled and spend some time with his housemates. Jake will be a pitcher on the school's baseball team and he gets to stay with his teammates in a house on campus. We meet an array of different guys that are all on the team and watch as they have the time of their lives over a three day weekend. From girls to drugs to getting into the baseball spirit these guys get to experience it all.

This is what director Richard Linklater calls his "spiritual sequel" to his hit Dazed and Confused and that couldn't be a better way to describe it. Linklater takes what was so great about that film and possibly makes an even better film with Everybody Wants Some!! It hits a lot of the same beats that Dazed and Confused does but it's able to stand on it's own and be different enough to make it stand out. A lot of that should be credited to Linklater but the cast of guys here are a big part of that as well. Blake Jenner gives a breakout performance as the lead here and shows that he's got more acting chops than what he showed us when he was on Glee. The rest of the cast features a lot of up coming, good looking guys who all do well in their roles respectfully but it's Jenner's show and he is definitely the stand out. It's refreshing to see a comedy be consistently funny throughout and I would argue this is one of the funniest films of the year. While hitting well on the comedy side when the film does try to be serious it does a good job there as well.

There really wasn't much here I didn't enjoy. Some of the jokes don't quite hit and there are a few characters I would have liked to have seen less of than others. The obligatory love story here feels almost like an afterthought because they go away from it for so long but it eventually comes around in the end. It feels like the film runs out of steam a little towards the end so cutting the run time by about fifteen minutes could have helped.

All in all, Everybody Wants Some!! is an effective comedy that provides a lot of laughs, has a breakout performance from Blake Jenner and is one of the best coming of age films we've seen in quite some time.