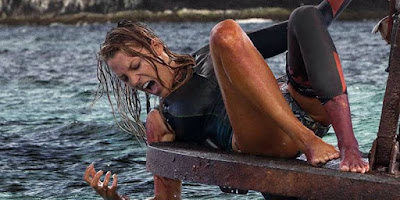 The Shallows tells the story of Nancy, a college medical student who travels to a secluded beach that was one of the favorite spots of her late mother. Nancy arrives and immediately sees it as the paradise that her mother always told her it was and the perfect place to surf. As the day goes on she meets a few locals, takes in more of the scenery and eventually comes in contact with a great white shark. After being attacked by the shark she finds a small spot of rocks where she is stranded about 200 yards from the shore. With no one around and nothing in her reach to help her she must find a way to get by this shark that won't stop stalking her.

For a film set up like this where we have essentially only one character for the duration of the film, you need to see a fairly strong performance by that actor. Thankfully, Blake Lively gives it her all here and carries the film from start to finish. This is a tense film that leaves you on the edge of your seat. Watching this girl fight for her life and try to figure out a way to outsmart this underwater creature makes for some great entertainment. Seeing her make friends with a wounded seagull and having him as a companion for a portion of the film make for some laughs as well. Director Jaume Collet-Serra has had trouble in the past keeping up the suspense in films like Non-Stop, Unknown and Run All Night but here he reaches a new level that allows him to focus on one character and show her struggle. The special effects are quite good as well. Seeing the shark for the first time jump out of the water will make you never want to go into the ocean again, similar to what Jaws did back in the 70's.

While The Shallows is a very tense and entertaining film there are some things that keep it from being on the level of a film like Jaws. It's hard to imagine being in a situation like Nancy gets into in the film and no one really knows how they would handle it if it did happen. Despite that there are some moments where I did question the actions of Nancy and wonder why she did a few things that seemed like they wouldn't matter if she did them or not. There are also a few sequences that feel really forced just to add a little bit more emotion to the situation like Nancy video calling with her dad and sister and another scene that shows them surfing together. We also get a very cheesy moment where some not so good looking dolphins make an appearance and it's one of the more laughable parts of the film.

This could have easily been a huge disaster but thanks to some improved direction by Jaume Collet-Serra and a charismatic performance from Blake Lively, The Shallows is one of the better summer movies this year.