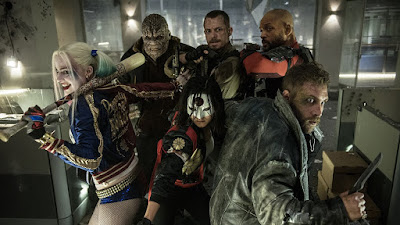 A secret government agency run by Amanda Waller (Viola Davis) puts together a team of super villains to execute black ops missions to help protect the citizens of the country from super human beings such as Superman. Waller and the agency may have more up their sleeve than the team realizes but they are willing to do whatever they can to gain freedom from being imprisoned. Their first mission, to stop an evil force in the form on Enchantress (Cara Delevingne), a magical witch who has taken the form of archaeologist June Moone.

This is a film that seems to have everyone split with their opinions and I'm right there in the middle being on both sides of the argument. There is a lot to enjoy here and despite some downright awful parts I feel the good slightly outweighs the bad. The best parts here are the members of the cast who do give good performances and do their comic book characters justice, Most of the film is focused heavily on Deadshot (Will Smith and Harley Quinn (Margot Robbie). Both actors do give really good performances and are the definite highlights here. It's great to see Will Smith finally get a good role to play because it feels like the last few things he's been in have either been average or just a few steps below. Here he gets back into a little more familiar character but Deadshot has more edge to him and is technically a bad guy, something we don't see Smith often play but he does a good job in the role. As for Margot Robbie she totally embraces the role of Harley Quinn. She hits all the right beats and you can tell she's really having a lot of fun in the role. One other member of the cast who is a standout is Viola Davis as Amanda Waller. You may think it's odd to see someone not a part of the Suicide Squad make that much of an impact but she plays one badass character.

Everyone else in the cast is either average or doesn't do enough to really even matter. Jay Hernandez is decent as El Diablo but he's not given anything to do, Joel Kinnaman does give a better performance than what we've seen from him the past and surprisingly Jai Courtney isn't too bad as Captain Boomerang, although his character ends up being rather pointless as a part of the squad. We do see some nice action set pieces here and the effects for the most part are handled well. The makeup, especially on the character Killer Croc, is better than what I've seen in some recent comic films. Tonally, the film is kind of all over the place but it works for what they're trying to do here. You get quite a few laughs, there are a few emotional moments that work and the action scenes, save for the end, all tend to work.

There are two really big flaws that make me dislike a large portion of the film. Those two flaws with be the characters of the Joke (Jared Leto) and Enchantress, Enchantress should not have been the choice for the villain. The character herself is not really all that interesting and Cara Delevingne gives a pretty bad performance in the role. It felt like if they would have gone with a different villain this could have been a completely different film and that may have been for the better. When it comes to the Joker I can't tell if the problems lie with Leto's performance or the way he was directed by David Ayer. I would say it's probably a little of both because he feels like Leto is trying a little too hard to be over the top and crazy but it also feels like Ayer is just letting him do whatever he wants. Jared Leto I think can still be good as the Joker but maybe under different direction he may be able to do a better job.

My other problems with the film are with the plot and the soundtrack. While David Ayer and the writers tried to bring us a superhero film that is not like other superhero films, it relies very heavily on things we've already seen in other similar films. This is definitely an origin story but every single character gets some type of origin flashback and after a while it just got tiresome. I appreciate them trying to give some development to the characters but when you focus on two characters and give everyone else just a few moments here and there to show what they have to offer it just doesn't work. As for the soundtrack, there were times that it completely took me out of the film. The tried to shove so many different songs into each scene that it got annoying and felt like they were focusing more on the music rather than the story at times. Also what's the deal with picking songs that don't even go with the scenes they're in?

Like I mentioned before despite all the problems here I think they good outweighs the bad. There is a lot to groan at here but plenty of moments that get you excited at the same time. Had the writing, direction and some of the performances been better this could have been a knockout film. What it does get right it does well and those are the reasons to definitely give this one a shot.