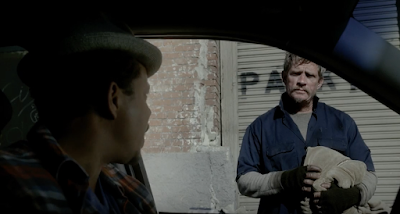 Cardboard Boxer stars Thomas Haden Church as Willie, a down on his luck homeless man who is a genuine soul. He spends most of his days roaming the streets, doing what he can to earn a little money for food and reading the diary of a young girl that he found in a dumpster. His nights are a little more exciting thanks to a couple of young guys paying the homeless folks on Willie's block to fight one another. Willie knows it's not the right thing to do but he will do whatever he can to earn some extra money to take care of himself.

While this is a small film it certainly has a lot of heart. Director Knate Lee does a nice job and showing this man's hardships having to live on the streets and the conditions that some of these people have to deal with on a daily basis. None of this would be possible without a good performance from the leading man. Thomas Haden Church gives a lot of depth to his character, which is great considering he doesn't say much, and is able to lead the film respectively. About halfway through the film Willie befriends a young war veteran named Pinky (Boyd Holbrook) and their relationship is one of the strongest parts to watch. Boyd Holbrook as Pinky is definitely the standout in the cast. For someone who isn't in every scene he definitely steals all the ones he's in and gives a breakout performance.

There's definitely a lot to like here but the film is far away from any faults. For the film to be less than an hour and a half it certainly does feel like it goes on for much longer. It has an extremely slow pace that will probably turn off a lot of viewers. There are times when the drama gets a little too melodramatic and heavy handed. Terrence Howard has a role here that feels very underused. It's a role that really anybody could have played but it feels like Howard was cast as a familiar face to use on the poster. He doesn't do a bad job in the role he's just underutilized. The middle portion of the film is the weakest part, Things seem to get a little off track but thankfully the first and last acts save the film as a whole.

This is a small film that probably won't be seen by a large amount of people but it is definitely worth a watch at some point. The performances of Church and Holbrook are worth watching and getting to see some of what the homeless have to deal with might be eye opening for some. Things do move very slow here and at times the drama can be a little much but overall it is a decent indie film that doesn't quite reach it's full potential.