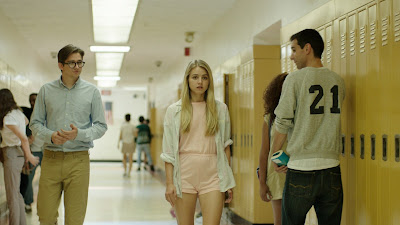 Cheerleader follows the character of Mickey (Catherine Blades), a high school cheerleader who's got it made. She's one of the more popular girls in school, has a group of girls she considers her best friends and a boyfriend to round it all out. Unfortunately, she and her boyfriend break up which leaves Mickey feeling hurt and used. Being the quite the promiscuous girl, Mickey decides to get back at her boyfriend by going out with another guy to make him jealous. She chooses Buttons (Chris Bert), one of the nerdier boys in her school, as the guy she's going to go out with. Going out with someone like Buttons with either make her ex-boyfriend extremely jealous or cause him to lose his mind.

This little film was quite the surprise for me. On the surface it doesn't look like there is much to offer other than a typical revenge type of story but director Irving Franco is able to put together a solid drama about the awkwardness and hardships of being in high school. One of the biggest issues teenagers face in high school are relationships and it's great to see a film really delve into that and showcase a character like Mickey who struggles not only trying to find herself but also trying to do whatever she can to make herself happy. We watch as she continues to be promiscuous throughout the film and it's tough knowing that this is what a lot of girls go through because of the pressures of high school.

There definitely wouldn't be much to praise here if there weren't some good performances. Thankfully, Franco is able to get some strong performances out of most of his cast. Catherine Blades is a star in the making, She plays a troubled teenager very well and gives a really good performance for someone who hasn't had too many other roles. Chris Bert brings a lot of charm to his role of Buttons and really makes the audience feel for his character. Rachel Beyda, who plays Mickey's friend Barbara, is definitely a scene-stealer throughout. A lot of the comic relief is brought on by her and she handles the material well.

While I appreciate the film having getting in and doing what it needs to in it's short runtime, only 80 minutes, but I wish it would have went on a little longer just to give a little bit more depth to the story and the characters. The pacing could have been slightly better for such a short film but it's nothing that gets out of hand. There are a few performances from some of the side characters that felt not up to par with the performances of the main cast. Not that those performances take away from the film as a whole they just felt underwhelming to say the least.

All in all, Cheerleader is a solid indie film. There are some great performances from the young cast, the cinematography is really impressive and it's nice to see a film about high school stray away from the norm. If anything this needs to be seen for Catherine Blades great performance and some solid direction by Irving Franco.