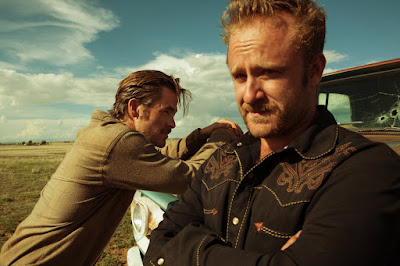 There is nothing like a modern-day Western. Westerns are a genre that continually get forgotten and I'm not sure why because when they are well crafted, westerns can be some of the best movies. When done the right way with great direction, amazing writing, and great performances you get a film like Hell or High Water.

Hell or High Water stars Chris Pine and Ben Foster as a couple of brothers in West Texas who resort to robbing banks in order to save their family's ranch. Hot on their trail is Ranger Marcus Hamilton, played by Jeff Bridges, who is determined to track down these boys and put them behind bars. As the boys get closer to saving their family's ranch, the closer the ranger gets to putting a stop to the boy's crimes.

This film kind of came out of nowhere for me. It opened during the later part of the summer with not a lot of promotion but was surprisingly met with overwhelming reception by critics. After seeing the film it is easy to see why their is so much praise for it, First and foremost it starts with the direction of David Mackenzie and the writing of Taylor Sheridan. The direction by Mackenzie moves at a smooth pace and consistently keeps things interesting. In addition to the directing the cinematography is some of the best in any film from this year. Taylor Sheridan's writing is the biggest highlight here. Just like he did with last year's Sicario, Sheridan keeps the dialogue fresh and knows how to keep things tense when they need to be.

All the performances from the actors involved are top notch from the main stars all the way down to the supporting actors. This is one of the best performances Chris Pine has given in his career and I hope we get to see him in more roles like this. Ben Foster's character is similar to ones he's played in the past but he brings a lot of charisma to the role and definitely does a good job with what he's given. Then there's Jeff Bridges who steals every scene he walks into. Just like with Foster's character, this is one we've seen Bridges play before but he plays it so well that you get completely invested in his hunt for the two robbers.

While this isn't a perfect film there really isn't anything I can think of that I didn't like about it. The story is investing, the performances are great, the action set pieces work well and the times the film tries to be humorous actually work out better than you'd think they would. Hell or High Water is beyond any doubt one of the best films of the year.