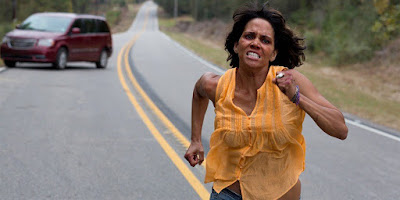 What would you do if your child was taken from you? Halle Berry shows us that a parent will stop at nothing to get back her son in Kidnap. Berry plays Karla Dyson, a single mother who is overworked at her job as a waitress. She finally gets some time to spend with her son Frankie (Sage Correa) and decides that they are going to have a day out at the park together. Everything is fine until Karla has to take a phone call and steps away from Frankie for just a couple of minutes. In that time Frankie goes missing and Karla sees him being dragged into a car by an unknown person. She attempts to stop them in the parking lot and sets off on a long car chase to try and get back her son.

We've seen this type of film before so the story is nothing new. You would think with this being a pretty regular setup for a film that the filmmakers would take the opportunity to try and do something do with a familiar story. That's not the case here at all. From the moment that Frankie is taken you can pretty much guess the way that this is going to play out. The only thing that remains somewhat of a mystery is who the kidnapper is and why they took Frankie in the first place. But even that aspect of the film is nothing special and ends up being rather generic in it's own right.

For a film like this to really get it's message across you've got to insert some emotion into the story and really make the audience feel for the characters. This story is built around Halle Berry and her performance and while she certainly doesn't give a bad performance there's nothing about her character to really grasp onto. She's just a mom who really loves her son and now will do whatever she can to get him back. Sure we see that she's divorced and has a pretty terrible work life but that's all we get to know about her. Despite not being given much Berry does do somewhat well with what she's given. It just would have been nice to get more out of her character.

The film plays out like one long car chase and that car chase is stretched out to a little over an hour and a half. There are some rather tense moments along the way but none that will really put you on the edge of your seat. Those faults I would attest to the direction and writing which neither are particularly good, even for this genre. It feels like whatever was put on paper sounded good but the execution of it doesn't come together the same way.

At the end of the day Kidnap is just a generic action thriller that gives you what you expect from a film of it's kind. Aside from a few moments here and there that are decent the overall experience is pretty lackluster.