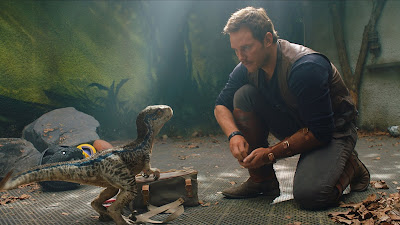 Intro
When Jurassic World debuted in 2015 it went on to become a bigger hit than most people anticipated. Critics were mostly positive on the film and audiences seemed to enjoy it as well, so a sequel was going to be inevitable. How could they improve on what was a fairly solid and entertaining film that easily stacks as the second best in the Jurassic series?

Plot
This time around the island that is home to all the dinosaurs we've come to know is about to be destroyed by an active volcano. There is a huge debate on whether or not anything should be done to save these creatures. Majority of people are against saving them, including Dr. Ian Malcolm (Jeff Goldblum) who stands before congress to say why we shouldn't save them. Once the verdict is in Claire Dearing (Bryce Dallas Howard) is approached by a businessman Eli Mills (Rafe Spall) who works for Benjamin Lockwood (James Cromwell), an old friend of Dr. Hammond. They want Claire and Owen Grady (Chris Pratt) to lead a rescue team to the island and save at least one of each species of dinosaur.

The Good
Director J.A. Bayona has put together a nice looking film. Most of the scenes are shot well, the specials effects are once again pretty spectacular and there are actually a decent amount of practical effects on some of the dinosaurs that look impressive. In a surprising part of the plot this is the first film in the series to finally take things in a new direction. With the island in peril things eventually take the dinosaurs and the action away from what we have typically seen in this series and that was something I definitely appreciated. There are a lot of tense moments especially in the last third where the story almost turns into a horror movie. The performances here are for the most part fine. Bryce Dallas Howard and Chris Pratt prove to be good leads again although their characters still have some terrible qualities. Rafe Spall as the antagonist actually does a pretty good job in the role despite not being given a whole lot to do with the character.

The Bad
Even though the film gets credit for taking things in a new direction that doesn't make up for it's many shortcomings. Outside of the main three actors nobody else is really given anything worthwhile to do or isn't good enough to lift their characters above mediocrity. Veteran actors like James Cromwell, Ted Levine and Toby Jones are pretty much wasted in their roles since they basically just play stereotypes. Worst of all Jeff Goldum's comeback to the series is nothing more than a cameo and while he's couple of scenes do work it's just not enough for that character to have. One aspect of this series that's never been great but is so much worse here is the writing. Dialogue in many scenes is cringe worthy and a lot of the time where humor is added it feels too forced and not natural. Normally I would say this comes from poor direction but I actually thought the direction here was not bad it just felt like everything around the direction didn't come together the way that is should have.

Final Thoughts
Jurassic World: Fallen Kingdom has it's moments and is enjoyable enough that if you are a fan of the series you will more than likely have a good time. This is a step in the right direction story-wise however it is a step down from the previous in terms of quality. No new fans will be won over with this film and it's probably going to split the majority of fans of the previous films.