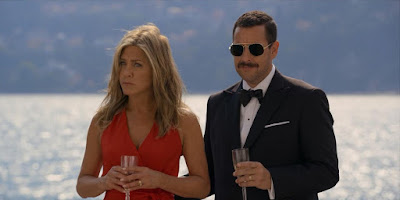 Murder Mystery marks the fifth movie from Adam Sandler to premiere on Netflix. Sixth if you count The Meyerowitz Stories (New and Selected) but that one wasn't a Netflix original movie. The four movies preceding this have all been anywhere from flat out horrible to somewhat average. With not much in the way of competition, Murder Mystery makes its mark as the best Adam Sandler movie on Netflix. Is that enough to warrant a watch? Let's find out.

Reuniting once again after the awkwardly bad Just Go With It, Adam Sandler and Jennifer Aniston play Nick and Audrey Spitz. They've recently been in somewhat of a rut. Nick is trying to become a New York City detective but has failed his test for third time. Their 15 year anniversary is coming up and Audrey can't stop thinking back to when they first got married and Nick promised her a trip to Europe. After feeling guilty being confronted by Audrey about why he still has never taken her, he books a vacation to Europe. While on the plane they meet a mysterious man named Charles (Luke Evans) who invites them onto his ship once they land. On the ship they are introduced to an array of different people who all become suspects after one of them is murdered.

Surprisingly enough there is quite a bit to like about Murder Mystery. One of the few things that did work in Just Go With It was the chemistry between Sandler and Aniston and here is no different. Them playing a married couple is very believable and there are many moments in the movie where they have a good back and forth with one another that makes for one of the highlights. There is also a good mixture of comedy and action throughout. While the action never gets to the same level as the comedy the filmmakers do a good job balancing everything tonally. Quick one-liners and sight gags are mostly what the comedy brings here but more often than not it seemed to work.

Thankfully, Sandler and Aniston do their best to make this movie what it is because without them the rest of the movie falls a bit flat. It's got a nice setup and almost feels like a new age version of Clue in a way. One of the biggest problems though is that outside of Sandler and Aniston everyone else in the cast feels underutilized. They do well in establishing a cast of colorful characters but they are all pretty much just playing stereotypes. The only one really trying here is Luke Evans, who does do a good job, his character just isn't given as much to do as they make it seem early on. In the first two acts everything is paced relatively well and that's when the story does get interesting and keeps you guessing. Once the third act rolls around it kind of goes off the rails from there to a place it could have easily avoided.

In the end, Murder Mystery does just enough to offer up a fairly entertaining watch. The strengths of Adam Sandler and Jennifer Aniston make for a great duo and they do the best they can with the material. Sadly, the movie never the full potential that it has and settles for something that's just slightly above average.