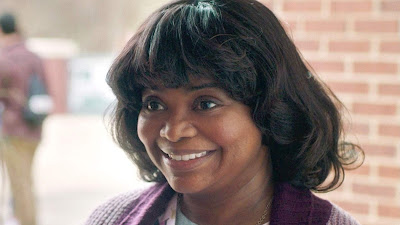 Ma follows Maggie (Diana Silvers), a teenager who just moved with her mom (Juliette Lewis) back to the town where her mom grew up. Things start out not so great for Maggie at school but surprisingly enough it isn't long before she finds of a group of friends, who are all typical high school stereotypes, and they start hanging out. On one of the first days of them hanging out the friends get Maggie to beg adults to buy them beer from a local convenience store. That's when they meet Sue Ann (Octavia Spencer). She reluctantly buys the beer for them and they go on to have a good time. Sue Ann continues to show up around Maggie and her friends and starts to become a friend all her own. From continuing to buy them beer to letting them party in her basement, Sue Ann seems like the coolest adult in this small town. Things may not be what they seem as they continue to hang out with Sue Ann and things start to happen that question their relationship with this woman.

Director Tate Taylor and Octavia Spencer team up here once again after having great success together in The Help. This is definitely going in a much different direction than that film did but it is interesting to see people who haven't really done much in the horror/thriller genre to a stab at it (no pun intended). Octavia Spencer is without a doubt one of the best actresses in the game right now so it makes sense to try her luck in a role that she doesn't usually get to play. She is the driving force behind this movie and she carries it like a veteran actor should.

Spencer really gets into the role and makes the most of what she's given. Her character is given a lot of depth but it really does feel like most of that is in the performance more so than the writing. There is a great cast built around Spencer however, sadly most of them are severely underused. Juliette Lewis does give a good performance here as well despite not being given quite as much to do as some of the other characters. When it comes to actors like Luke Evans, Missi Pyle and Allison Janney it's a bit of a different story. All of their characters felt like they could have been played by anybody instead of well known names considering they all don't get a huge amount of screen time.

One of the highlights here is the relationship that Sue Ann builds with this teenagers. The best parts of the movie are when she is interacting with them, whether it's for better or for worse. Despite those being the better parts of the movie it would have been nice if any of the kids here could have given a halfway decent performance. It's hard to watch Diana Silvers through a lot of this because of how awkward her performance ends up being. With her being one of the leads she gets a lot of screen time and unfortunately she gives one of the weakest performances. Only one of the teens feels like their trying and that performance comes from Corey Fogelmanis as Andy. He's the only one that feels like he's not just a stereotype and his performance definitely tries to flesh that out in his character.

There are plenty of entertaining moments here, pretty much all of them involving Octavia Spencer. It's fun watching her character progress throughout the movie as she continues to dial up the crazy just a little bit more with each scene. If the movie didn't get bogged down by too many sub plots and a plot line that feels like it's missing a piece or two this could have ended up being one of the better thrillers in quite some time. What's left is still a solid thriller that gets by mostly on the strengths of Octavia Spencer's performance and waiting to see what her character does next.