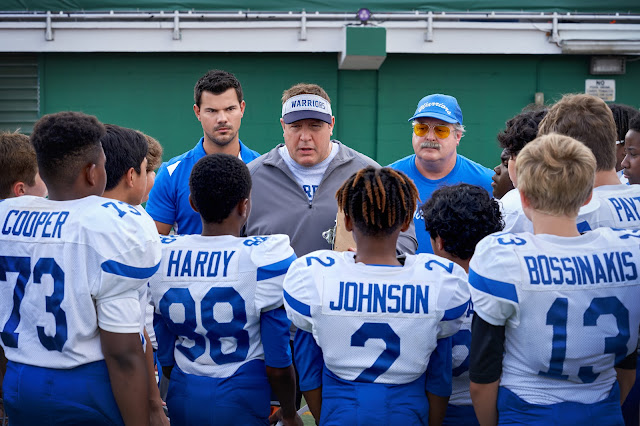 Home Team is the latest Netflix movie from Adam Sandler’s Happy Madison Productions. In this one we follow Kevin James as real-life New Orleans Saints head coach Sean Payton. After coming off of winning the Super Bowl in 2010 Payton gets suspended in 2012 for allegedly paying his players to purposely injure the players of other teams. After he gets suspended Payton spends his time trying to build a relationship with his 12-year-old son. His son just so happens to play football on the worst team in his Pop Warner league. To try and get closer with his son Payton eventually becomes the team’s offensive coordinator to try and help them turn their season around.

This movie is quite the oddity. The movie itself isn’t really odd but just the whole concept is kind of mind boggling. I don’t think anyone ever imagined there would be a movie about what Sean Payton was doing during his suspension from the NFL. Let alone it being produced by Happy Madison and then having Kevin James play Payton himself. It almost sounds like this movie was made by those manatees from that South Park episode where they toss random balls into a generator and make episodes of Family Guy based on that.

With all that being said this is the perfect example of an average movie. There is really nothing particularly bad about Home Team but there’s also not too much that’s good here either. It’s an hour and a half movie with some okay performances, a few chuckles here and there and a pretty traditional rag tag sports movie plotline. The biggest problem that it has is that it doesn’t do anything all that well. For a comedy, it’s not very funny. There’s barely an ounce of real drama here. The only thing it really has going for it is the sports aspect but even that doesn’t get executed all that well either. Unfortunately, it suffers from what almost every Happy Madison suffers from and that’s laziness. From the writing to the direction to some of the performances it all just comes across as lazy.

I wouldn’t put this in the bottom tier of Happy Madison Productions, as there are a lot you could put at the bottom. Home Team ends up somewhere in the middle, which seem to be where most of the Kevin James vehicles end up, at least for me. Like I said before it’s not flat out bad but it’s not particularly good either. If you’re a fan of Kevin James I would say give it a shot but if not then it’s probably not worth your time.