I Love My Dad: Review 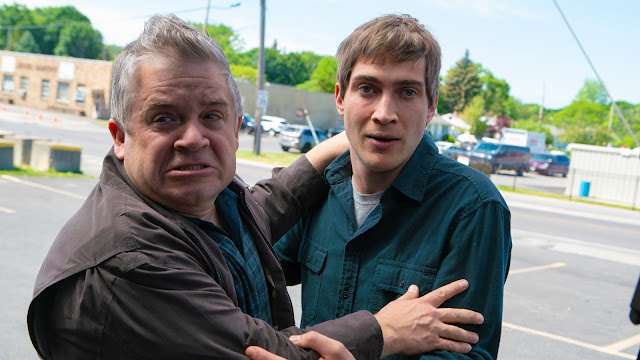 I Love My Dad follows Chuck (Patton Oswalt), an estranged father who wants nothing more than to reconnect with his son Franklin (James Morosini). Franklin unfortunately won’t give his father the time of day as he’s fed up with years of his father lying to him and never being there when he needed him. Chuck ultimately becomes desperate in his hopes of his son letting him into his life again. After meeting a nice waitress named Becca (Claudia Sulewski), Chuck comes up with the idea to make a fake online profile using Becca’s name and pictures as a way of connecting with his son. Franklin instantly becomes infatuated with Becca and now Chuck must decide how long he lets this go on before it hurts their relationship even more.

James Morosini proves himself to be a triple threat here. Taking on the reigns of not only starring but also directing and writing he puts on lot on himself. He should proud of what he’s accomplished here as he knocks it out of the park with, I Love My Dad. This very easily could have been a complete mess just based on the concept of someone getting catfished by their dad. A big reason Morosini can make this work so well is this being based on actual events from his own life. He’s able to make it feel real but is still able to add in plenty of humorous moments to mix in to make things lighter from time to time.

The approach Morosini takes in showcasing this extremely awkward relationship is one of the biggest highlights of the movie. Throughout when Franklin is messaging “Becca” we see the actors interacting with each other as if they were talking to each other in person. This visualization works incredibly well and makes for some of the movies funniest moments as it adds even more to the awkwardness of the situation. Thankfully, Morosini doesn’t hold back on the awkward situation, and he displays plenty of scenes that will make you cringe at the thought of something like this happening in real life.

Patton Oswalt was the perfect choice to play the dad. This is without question one of the best performances in his career and really shows he has quite a bit of range in his arsenal. Morosini gives a good performance as well. He starts off a little rigid but as the movie progresses, he starts to come into his own and when the more dramatic scenes happen that is when he really displays his acting capabilities. An unsung hero of the movie is Claudia Sulewski who is essentially playing a dual role as the real-life Becca and then the “Becca” that is actually Franklin’s father. She pulls off both roles with lots of charisma and adds so much to this movie. Rounding out the cast we get some nice small performances from Rachel Dratch and Lil Rel Howrey. However, this could have used more Lil Rel Howrey as he is sadly underused.

Other than some pacing issues and some jokes here and there that don’t land there is plenty to like in I Love My Dad. With that said this is a movie that won’t be for everyone. Just because of the concept and how awkward a lot of the sequences are I can see it turning off some viewers. If you’re not bothered by the nature of the content involved this is well worth your time and should definitely be seen.