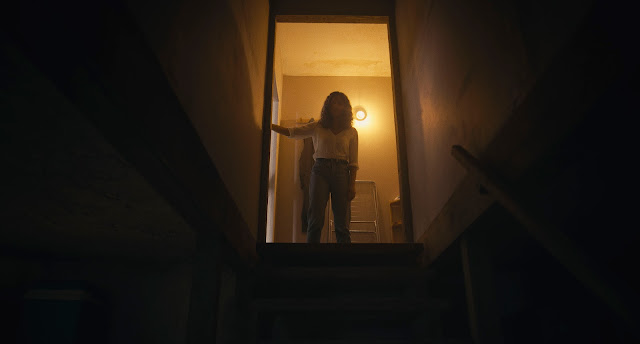 A young woman named Tess (Georgina Campbell) rents out an Airbnb just outside of Detroit while she's in town for an interview. When she arrives, there is already someone staying there, a man named Keith (Bill Skarsgard). Turns out they both have the house reserved for the same dates through different websites. Keith decides to let Tess stay so they can figure out their situation the next day. While Tess is hesitant at first she decides to stay. During their stay Tess and Keith soon discover that the house may not be what it seems as there is a secret lurking that will soon make its presence known.

2022 has been a great year for horror movies thus far. With great movies such as X, The Black Phone and Nope, Barbarian joins that list and is the most unpredictable of the bunch. Director/writer Zach Cregger has crafted one wild ride. This is a movie that hits so many different beats as not only is it truly frightening but it adds some much needed humor and even small touches of romance. It is best to see this without knowing too much as the story being so unpredictable is one of the best aspects. You really have no idea where it's going to go and then when you think you've got it figured out it decides to throw in the kitchen sink just to make you even more unaware of what's to come.

While there is a nice slow build up in the early going, once things hit the fan it doesn't let up until the end. There are some jump scares here and there but thankfully this isn't completely reliant on them and is able to build a great atmosphere with a terrifying villain. The cast here, despite not having very many characters, is all top notch. Between the three main leads we get some really great performances. Bill Skarsgard gives one his most reserved roles, he comes off charming but always feels like there may be more to him than he shows. Justin Long plays a crucial role and he plays a character that we don't normally see from him but he knocks his performance out of the park. Both the male leads are great but this would be nothing without Georgina Campbell as the main protagonist. She carries this movie like a pro and is able to give one of the best performances in horror movie we've seen this year.

There are a few tonal shifts that are a bit jarring but they don't completely derail the movie. This is one of the few instances where the movie could have benefitted from being longer. At one point a character is introduced and we get a little backstory on them, however it would have been nice to have that fleshed out more. It felt like they were setting up more of the backstory and then they just kind of drop it. Had they added another 10-15 minutes they could have added more depth to the backstory and it would have made it that much better. Despite that it all still works and it is entertaining as hell.

Barbarian is one insanely crazy ride. You never know what to expect next and the turns just keep on coming. It's tense, frightening and surprisingly funny. See this with a packed theater or with a group of friends to get the best experience. If you are a fan of movies that are out there and like to push the envelope you will have a ball with Barbarian.