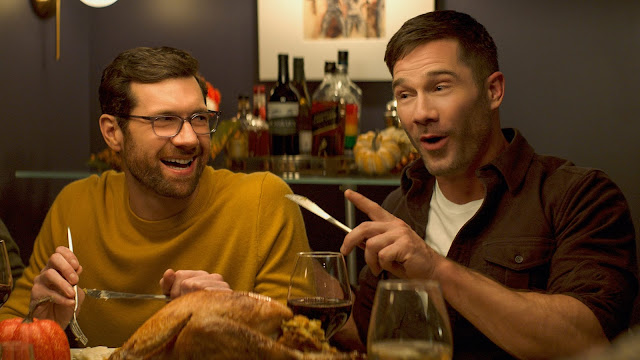 Bros follows Bobby (Billy Eichner), a single guy who runs his own podcast and is in the process of opening the first LGBTQ+ history museum. Bobby has always been more into his work than relationships so he mostly uses dating apps to hook up rather than commit to any relationships. While at a club one night he meets Aaron (Luke Macfarlane), a guy who is not normally his type but there's something about him that interests Bobby. Aaron also has never committed to a relationship before either and mostly just hooks up as well. Both guys are complete opposites but share some similar beliefs that make them very compatible. Despite never committing to relationships in the past Bobby and Aaron decide to give it a try but both have reservations about doing so.

As far as romantic comedies go Bros does a great job at giving audiences something different. This is one of, if not the first mainstream rom-com to feature two male leads. Billy Eichner and director Nicholas Stoller helm the script here and they put together a rather clever and heartfelt look into the relationship of two gay men. The movie does a great job at giving the LGBTQ+ community a time to shine but it's not afraid to also poke fun at the community as well. One of the best aspects is how self aware the world is and the filmmakers don't shy away from showing the audience plenty that they probably haven't seen before in a mainstream romantic comedy.

Director Nicholas Stoller has had a great track record over the years of solid comedies. This is his best film since his first which was the fantastic Forgetting Sarah Marshall. He gets a lot of genuine laugh out loud moments from his cast and the script from him and Eichner is written so well you can't help but enjoy it from start to finish. Bill Eichner and Luke Macfarlane are great together as Bobby and Aaron. Their chemistry is what carries the film and they both carry it with plenty of charisma. They manage to keep the laughs coming as this is filled with nonstop jokes throughout.

There really isn't much you could say about this that's negative. It may be a tad too long and gets a little slow in the middle. However, despite those minor gripes this is well worth seeking out. Bros is one of, if not the funniest movie of the year. Billy Eichner and Luke Macfarlane are great together. The supporting cast around them is fantastic as well, including some great cameos. Nicholas Stoller's direction and the script he put together with Eichner is one of the best in years.