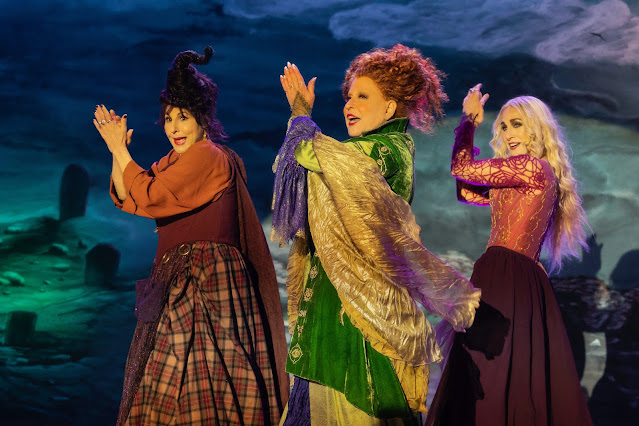 Hocus Pocus opened in 1993 and was a moderate hit at the box office. Over the years it has become arguably one of the biggest cult classics off all time. From home video to playing on TV to now on streaming this movie has garnered a huge success since its release. This is a mainstay every Halloween for kids, families and adults that grew up with the movie to watch so it was inevitable at some point we would probably see a sequel. The original is a fun and entertaining Halloween movie that doesn't break any new ground but is a good watch especially for families. Hocus Pocus 2 stays consistent with what worked in the first movie and is able to make a sequel that holds up well against its predecessor.

This time around we follow three new girls: Becca (Whitney Peak), Izzy (Belissa Escobedo) and Cassie (Lilia Buckingham). With them being into witchcraft, Becca and Izzy decide to check out the old Sanderson house that tells the story of what happened to the Sanderson Sisters 29 years ago. The girls end up accidentally lighting the candle that can bring the Sanderson Sisters back to life and we see Winifred (Bette Midler), Sarah (Sarah Jessica Parker) and Mary (Kathy Najimy) all return to wreak havoc on the town of Salem once again.

We are in the age of legacy sequels, so studios are trying to see what IPs are popular enough to center another movie around. Disney obviously has a lot of properties at their disposal and Hocus Pocus made the most sense to give a sequel to after how big its popularity has grown over the years. Anne Fletcher takes over as director here and while not having the greatest track record in the past she does a good job here putting together a solid follow up to the original movie.

The sets and costume designs here are great once again. That was something that stood out in the original and they make it work once again. There are some bad green screen sequences a few times here and there and somehow, they look worse than in the first movie. Outside of the green screen the rest of the effects work to varying degrees but nothing gets worse than those green screen effects.

Bette Midler, Sarah Jessica Parker and Kathy Najimy all return as the Sanderson Sisters and once again they are all fantastic. They are the driving force of the movie, and they are chewing the scenery as best they can. It's great to see them easily step right back into these roles like they never left, and they provide a lot of fun throughout the movie. Outside of them the only other returning character is Billy Butcherson who is again played by Doug Jones. He provides some good comedic moments just as he did in the original. Sam Richardson joins the cast as Garrett, the guy who runs the Sanderson Sister's house and he does a good job in his role. Whitney Peak, Belissa Escobedo and Lilia Buckingham are welcome additions to the cast. Their characters get a lot do and the actresses all work well together to make this group a solid successor to the original trio.

Hocus Pocus 2 is an entertaining sequel that provides enough fan service while also adding some new elements to the franchises' lore. There are some questionable effects and some moments that don't work entirely. Some of the fan service can be a little much at times but not so much to take you out of the movie. It is a harmless watch that is sure to entertain kids and adults who grew up with the original movie.