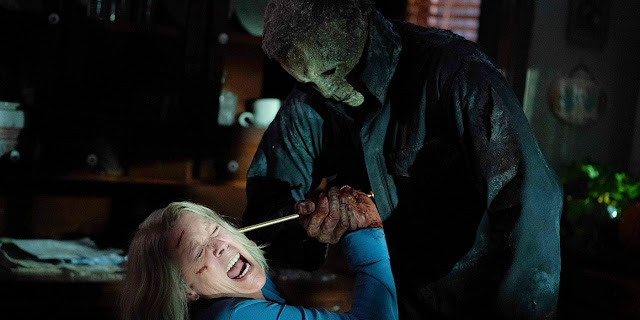 Halloween Ends marks the final installment in the David Gordon Green trilogy that is a direct follow up to the 1978 original John Carpenter film. Whether or not this is the definitive final Halloween movie remains to be seen but it seems likely within the next 5-10 years we'll see another reboot of some kind. Halloween (2018) kicked off this new trilogy with arguably the best Halloween movie since the original. Last year's Halloween Kills was a bit underwhelming but still managed to be entertaining despite some odd choices. Does Halloween Ends give the franchise a proper send off or does it drop the ball with it's finale?

It's been 4 years since the events of Halloween Kills. The town of Haddonfield is still not right after Michael Myers tore through the community and wrecked havoc once again on Halloween night. Michael has gone underground and hasn't made his presence known since that night. Laurie (Jamie Lee Curtis) and her granddaughter Allyson (Andi Matichak) are now living together and are still trying to pick up the pieces to their lives. Allyson is introduced to a young guy who has had his own experience dealing with trauma named Corey. A year after the Halloween Kills events he inadvertently caused a death and has been seen as a new monster of the town, since the community hasn't had to deal with Michael. As Allyson and Corey's relationship grows Laurie starts to suspect that he may possess the same evil as Michael as she tries to keep that from spreading into the town.

Right off the bat this is an interesting entry into the franchise. David Gordon Green decides to go in a different direction that we've seen before and tries to do something we've never seen before from Halloween. The decisions made here are going to be very divisive for the fan base. This entry doesn't stick to the same formula that most of the other movies do and for better or for worse it's at least a breathe of fresh air to see them attempt something different.

A large problem that Halloween Ends does have is that it focuses the majority of it's runtime to a new character and is less focused on Laurie and Michael. They still play big parts in the storyline but not to the degree that you would think. For it to be the final movie in this new trilogy and it being advertised as the supposed finale to the series, that is going to disappoint some fans to not get more of what they came to see. Personally for me, I think the decisions to go in a different direction actually work to the movie's advantage. They are swinging for the fences here and while I don't think they knock it out of the park it is effective enough to make things interesting and lead to a satisfying ending.

The kills and the gore are ramped up here, even more so than in the last two movies. Once things kick into gear there is no shortage of gruesome brutality and all of it works for the most part. Jamie Lee Curtis once again kills it, pun definitely intended, as Laurie Strode. Seeing her after losing her daughter and trying to make her relationship with Allyson work all plays out well. She gets plenty of moments to still be a badass and her showdown with Michael makes for an entertaining finale. Andi Matichak is great as Allyson. Her character gets more to do here and she does well showing how she deals with the trauma of losing her parents and boyfriend. Rohan Campbell who plays the new character Corey is a welcome addition to the cast. He balances being the nice guy and someone who has a lot of built up anger quite well. Whether you like the decisions made with this character or not it's hard to deny that Campbell still puts in a solid performance.

In the end, Halloween Ends is going to divide the fanbase. It is ambitious for trying to do something different but that unfortunately is going alienate the people who like seeing the standard formula. For me it works a lot more than it doesn't. Not every decision is a perfect one but I enjoyed what David Gordon Green was trying to achieve and I think it makes for one of the best entries in the franchise.