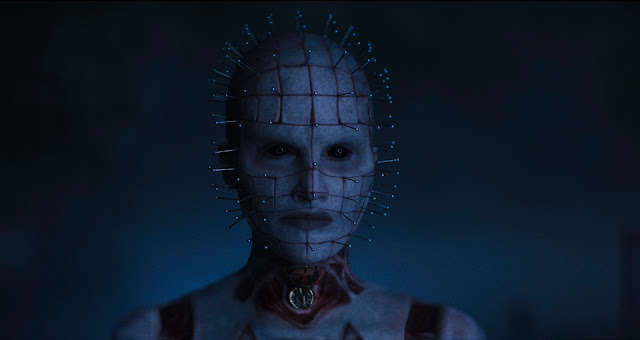 The Hellraiser franchise has been one of the more overlooked in the horror genre over the years. Outside of a good first entry and a decent sequel the rest of the series is mostly forgettable. It does boast one of the more memorable villains in Pinhead and the Cenobites are an interesting group that we unfortunately never really get to know too much about throughout the series. We are at the point now where the series needs an overhaul so we have a new take that tries to reignite some life into the series. Director David Bruckner takes over behind the camera and the story used is a lot closer to the original story from Clive Barker.
When a young woman named Riley (Odessa A'zion) comes into contact with an ancient puzzle box she inadvertently summons the Cenobites, a group of supernatural beings from another dimension. Riley's friends and brother end up getting involved with her situation not knowing that the Cenobites will stop at nothing to get what they want. When her brother goes missing Riley and her friends travel to a mysterious house that may have more going on inside than they think.
David Bruckner does a great job using Clive Barker's original vision but also adds touches of his own to the story and makes it stand out so well. This is without a doubt the best movie in the franchise since the original and I would say it actually edges out the original just a bit. Once the story kicks into high gear it never lets up and gives you plenty of gore and great horror elements. The movie is slick but it never overdoes it with making things too overproduced.
A new Pinhead is introduced here in Jamie Clayton and she fills the shoes of Doug Bradley very well. This is a character that has made a huge mark on the horror genre so it is no easy task to take over a role that Bradley has played so effortlessly for eight movies. While not appearing until more than half way through the movie, Clayton takes the reigns and never lets up. She steals every scene she is in and is a welcome addition as the new Pinhead. To go along with Clayton's performance, Odessa A'zion as Riley gives a great performance as well. Her character is the driving force of the movie and A'zion flawlessly carries the weight of the story on her shoulders and puts in stellar work.
Outside of Clayton and A'zion the rest of the cast does a fine job however none of their characters are very likable or get much depth to them. The story does take some time to really get moving. Pacing is a bit of an issue here as the movie really doesn't get going until about an hour into it. At just over two hours things feel too long and it seems like cutting maybe 15-20 minutes off the run time would have benefitted the story. There is some CGI used but it looks as if they still have a decent amount of practical effects where they can be used and the movie does a good job blending them together.
Hellraiser (2022) does a great job setting itself apart from the rest of the franchise. Once things get moving it doesn't let up. The character designs of the Cenobites are fantastic, all the effects work well and the performances of Jamie Clayton and Odessa A'zion are worth the watch alone. This is a great set up to what will hopefully lead to a new string of Hellraiser movies.
Rating: 7/10