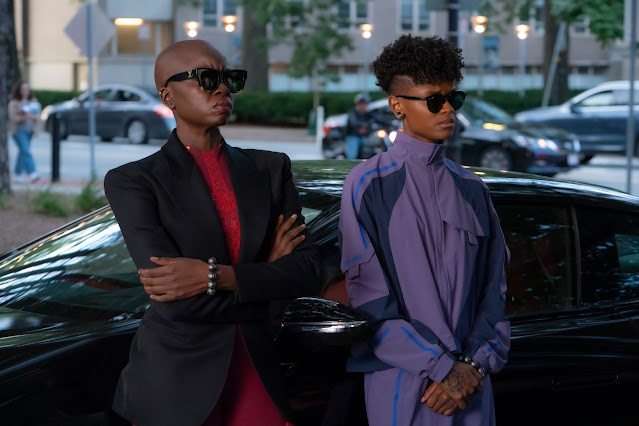 After the massive success of the first Black Panther, and because Marvel typically gives all their hero’s multiple movies, it was inevitable that a second movie was going to happen. Unfortunately, main star Chadwick Boseman sadly passed away in 2020 after a battle with cancer. Now the question is how does Marvel move forward with second movie after their main actor passes away? Well thankfully Ryan Coogler is back in the director’s chair and most of the crew from the first movie comes back meaning we should have another hit on our hands. Coogler and company have done the impossible of successfully making a good sequel when they no longer have their main actor.

In Wakanda Forever King T’Challa has passed away from an undisclosed issue. The country of Wakanda is in mourning and they don’t really know how to move forward with no longer having someone under the Black Panther mantle. Fast forward to a year later and Queen Ramonda (Angela Bassett) is now in charge of Wakanda and is trying to keep other countries from stealing their vibrainium. A new foe makes their presence known lead by the powerful Namor (Tenoch Huerta). There is a new source of vibrainium that has been found outside of Wakanda and Namor wants the Wakandans to help him retrieve. They refuse which leads to a major conflict between the two groups.

It goes without saying that Wakanda Forever is one of the best movies of Phase 4. There are some great tributes and dedications to Chadwick Boseman but they don’t overdue it. Ryan Coogler shows enough of the grief and sorrow from the main characters but lets them still find a way to move on and not just dwell on their loss. That too allows characters that we met in previous films gets fleshed out more and we get much more character development out of characters like Okoye, M’Baku and Everett Ross as well as giving new characters such as Namor and Riri Williams plenty of time to shine.

The action set pieces work extremely well. Whereas in the first movie they were good for the most part, but it had some effects issues with some questionable CGI. This time around the effects are much improved and the action sequences have more impact. With a runtime of two hours and forty-one minutes it doesn’t move at the quickest pace but that allows for more time with the characters and to develop them better. Things do slow down in the second act, and it starts to feel a little long but the first and third acts make up for it.

This movie works well mostly because the cast is giving it their all. Letitia Wright gets to take over as the lead here and she is as good as she’s ever been. The character of Shuri goes through a lot and Wright handles it all quite well. Angela Bassett is the standout and gives one of the best performances in comic book movie in quite some time. There are great performances from returning cast members Lupita Nyong’o, Winston Duke, Danai Gurira and Martin Freeman. Newcomers Tenoch Huerta and Dominque Thorne are both great additions to the cast. Huerta’s Namor is a great balance of menacing but comes off as a villain that you can sympathize with as well. Dominque Thorn as Riri brings a lot more to the movie than was expected. Seeing her in the trailers it felt like she was going to be an afterthought, but the character is a very interictal part of the story and becomes a bigger player than anticipated.

There were many concerns coming into this movie, but it is safe to say that Marvel made it work despite the unfortunate circumstances. Wakanda Forever is on par with the first movies, if not a little better overall. From the performances to the action sequences to the amazing score this is a great crowd pleaser and a welcome addition to the Marvel Cinematic Universe.