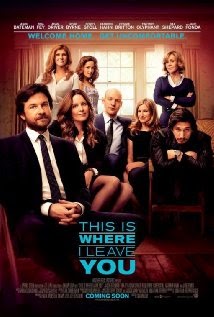 This Is Where I Leave You stars Jason Bateman as Judd Altman, a man who has just discovered that his wife has been sleeping with his boss (Dax Shepard). To make matters worse he receives a phone call not too long after from his sister Wendy (Tina Fey) telling him that their father has just died. Now all the Altman kids are coming home for the funeral and must stay for seven days as they take part in a Jewish tradition called "sitting Shiva." The Altman's don't have the best relationships and once they're all under the same roof chaos ensues.

There have been many films that are extremely similar to this premise. A dysfunctional family all come together for one reason or another and have to try and work out their differences for the sake of the family. Been there done that. That's the biggest pratfall for this film, the fact that it is so cliche and hits a lot of the same notes we've seen in plenty of other films. With that being said the film is able to step above being cliche because of the great cast that is put together here.

Director Shawn Levy (The Internship) hasn't made too many great films over the years but here the actors and himself are able to rise above a rather weak story and get some good performances as well as add some development to the characters. Not everyone involved gets enough time to shine because with so many good actors in the cast that's definitely going to happen but everyone in the cast does their best with what they are given. Jason Bateman is great as the leading man, which he tends to do every time he headlines a film. Tina Fey actually gets to show off some good acting chops that she's never really gotten to do before. Jane Fonda and Adam Driver are the two standouts in the cast who bring a lot to the screen every time their on. Everybody else in the cast including Rose Byrne,Corey Stoll, Connie Britton, Timothy Olyphant and Kathryn Hahn all give good performances they just don't get enough to do to really make their marks on the film.

It surprises me that this film was released in September because it feels like the perfect Thanksgiving film. A lot of the plot lines most people can relate to and having a dysfunctional family is something a lot of families experience so this seems like it will be a film a lot of families pick up or watch around the Thanksgiving time of the year. The film is able to have a good balance of comedy and drama and not push either to over the top territory. Most of the comedy doesn't seem forced and the drama bits never get overly dramatic which is rare to see in most films in this genre. There is a very minor twist at the end of the film that this really could have done without but all in all it ends up being a fairly enjoyable watch.

This Is Where I Leave You is nothing you haven't seen before and adds nothing new to it's genre but thanks to a great cast that provides a good mixture of laughs and drama the film is just a cut above average.