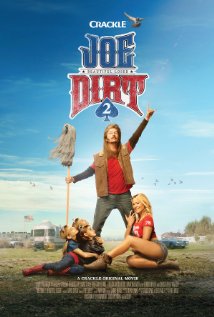 It's been 14 years now since Joe Dirt came out back in 2001. The film has garnered a small cult following despite the fact that it's not the greatest comedy to ever come out. I'll be the first to admit that while I don't find the film to be particularly good there are some parts that do make me laugh and it's something I can throw on everyone once in a while. Now here we are in 2015 and for whatever reason we're getting a sequel that I'm pretty sure nobody asked for. We can thank the streaming site Crackle for this sequel, who got the exclusive rights to show this instead of it going to theaters or straight to DVD. That should give you some perspective on how good this could possibly be.

When we last left Joe (David Spade) he had gotten back with his girlfriend Brandy (Brittany Daniel) and everything was going well for him. We watch as Joe and Brandy get married, go on to have three daughters and have a fairly nice life together. That is until a terrible storm comes and shakes things up. Joe and the family trailer get lifted up into a twister and when they finally land Joe finds himself back in 1965. Now Joe has to make sure that everything goes exactly how it originally did so he and Brandy can be together again.

Let me go ahead and just put it out there, this is an absolutely terrible film. This is one of the laziest attempts at a comedy sequel that I've ever seen and that's saying something considering some of the sequels we've gotten over the years. It blows me away that the filmmakers and everyone in the cast was on board for this because it will be a huge eye sore on everyone's filmography.

The one positive I can give this is that it was nice to see the majority of the original cast returning here. At the same time though that's a negative because everyone here, including David Spade, are much better than the material they put on screen. Nobody here is even trying, not even better actors like Christopher Walken, Adam Beach and Patick Warburton. Everyone was clearly here just for a paycheck, which couldn't have been much considering this is a straight to Crackle film.

Obviously this film isn't trying to win any awards and the filmmakers are just trying to make people laugh, problem is that the film is almost devoid of jokes. It's mostly a lot of sight gags that fall flat and anytime someone tries to set up an actual joke they fall completely flat. To add more to the list of negatives the film "parodies" certain parts from other much better films including Forest Gump, Cast Away and The Wizard of Oz. None of those jokes work either and it just makes everything seem so much sadder because the writers clearly thought adding that stuff in was funny.

Joe Dirt 2: Beautiful Loser is a sorry attempt at film making. The original film didn't have much going on for it to begin with, let alone enough to garner a sequel. This is a film that should have stayed on paper and never seen the light of day.