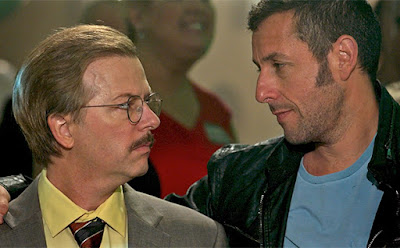 The Do-Over marks the second of four films for Adam Sandler to go straight to Netflix. There isn't much good to describe this particular film although I can say it is quite a bit better than his previous film, The Ridiculous 6. In this film we follow Charlie (David Spade) who runs into his old friend Max (Adam Sandler) at their high school reunion. While the guys catch up Charlie admits to not doing much with his life and basically hating every aspect of it. After hearing how bad Charlie has got it Max decides to take Charlie out for an awesome weekend on his boat where the guys have the time of their lives. That is until Charlie wakes up after Max's boats explodes to find out that Max has faked their deaths and given them both a fresh start with new identities. All seems well until the guys find out the identities they've taken are in deep trouble.

It's amazing to me how somebody like Sandler can go from having so much potential early on in his career, to actually branching out and doing some dramatic work only to just keep doing the same thing over and over again. He's clearly got an audience for it but it would be nice for him to do something even just a little different cause all of the comedies he continues to make follow the same pattern of low brow humor that it just gets irritating. To make it more irritating is that we've seen Sandler make solid comedies and give good performances but it just seem like now he's only in it for the paycheck.

With this film, the way it started actually had me somewhat interested. It does have a semi-intriguing plot but it's not long before we see it go the route of most Sandler films. The biggest problem here is that the film just isn't very funny. There are long stretches where there are no jokes or the jokes they do try and work in don't work very well. Sure there are some one liners here and there that might muster up a chuckle but there are no genuine belly laughs to be had here. Since this is rated R the filmmakers decided to up the gross out humor which is there just for shock value rather than actual laughs. This also has to be one of the slowest paced comedies I've ever seen. For it to clock in just under two hours, it felt like it was closer to two and a half hours.

While the film does start out with potential, it starts to drag in the middle. Then once it hits the third act it just completely drops the ball. Things seem to shift as the story moves along. It starts out with these two guys faking their deaths and living it up in their new lives then it eventually has what I guess would be considered a twist towards the end that completely changes the story. The thought behind the character motives once the story shifts is nice but it's too late at that point for any of the new information to matter.

Something nice I can say is that Adam Sandler, about half the time here, does actually look like he wants to be in the film. One of my biggest complaints with him recently is the fact that he just looks tired in everything he's in and doesn't seem like he wants to be there. There's flashes of what seem like he actually trying and then in other scenes he looks tired again. It's a step in the right direction you could say. David Spade doesn't add much to the film as the other protagonist. He's kind of doing his usual character he plays in most films and while he's not terrible he doesn't do much to help the film either. You also get an array of familiar faces like Paula Patton, Kathryn Hahn, Nick Swardson, Michael Chiklis and a few others that are given absolutely nothing to do. This is Sandler and Spade's show and unfortunately that don't do much with it either.

In the end, this is just another Adam Sandler comedy that lasts longer than it should, misses on more jokes than it hits and tries to cater to the lowest common denominator. While I think it had more potential in the story the filmmakers clearly just wanted to get a paycheck.