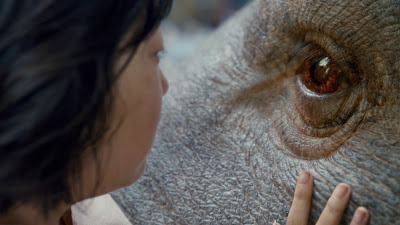 Okja is the latest original film to come from Netflix. It experienced a little controversy when it premiered at the Cannes film festival for being a film from a streaming service. However, I think once that audience watched the film their minds quickly changed.

Our story follows a multi-national corporation, the Mirando Corporation, which has successfully created a new species of animal that they call "super pigs." They send 26 of these super pigs to different farms across the world to be raised and taken care of and within ten years time they plan to use the meat from these pigs to sell to the mainstream. One of the super pigs, Okja, is sent to a farm where she is taken care of by a young girl named Mija (An Seo Hyun) and her father. Mija and Okja are the best of friends and spend all of their time together. The farm is visited by members from the Mirando Corporation including Dr. Johnny Wilcox (Jake Gyllenhaal) to take Okja to New York now that she is a fully grown pig and they want to use her for meat. Mija goes out to try and resuce Okja but soon finds out that the fate of Okja rests in the hands of many different people.

This is definitely one of the strangest yet most heart warming films I've watched in quite some time. Director Bong Joon Ho has always had a very unique style of storytelling and he brings the story of Okja to life in his own quirky way. The film does jump back and forth between being humorous, to action packed, to dramatic then circles back around. Surprisingly enough the changes in tone never take away from the story or make any moment feel unwarranted and that's a testament to great film making.

There is a certain political message here about the way we as a society get our meat and the way certain animals get treated that are going to be used for food. It is certainly eye opening, especially if you've never seen the circumstances that animals like cows and pigs are put through before they are sent off to be slaughtered. While the animals in this film are obviously made up it still makes you think about real life situations that are similar.

The biggest strength of Okja is the relationship between Mija and the animal. In the beginning it would have been nice to get a little more time with the two of them but as the story progresses you can really feel the emotion between the two characters. What's great is the personality inserted into Okja herself. You really see that she's more than just some animal, she's family to Mija and the story sells their relationship quite well. Young An Seo Hyun gives a really solid performance as Mija. The majority of the film is put on her shoulders and she does an outstanding job considering the rest of the cast.

Elsewhere in the cast everyone does a really stellar job. Tilda Swinton as the head of the Mirando Corporation is both menacing and hilarious at the same time. Paul Dano and Steven Yuen, who play members of an animal liberation outfit, have some great moments together along with the rest of their crew. The performance that I think is going to split audiences is the performance from Jake Gyllenhaal. He plays such a goofball and is giving a performance so outside of what we expect from him that for me it actually worked really well. His character is extremely annoying but that's kind of the point and Gyllenhaal makes it work.

In the end Okja works on many different levels. It's a story that will have you laughing in many moments and then have you crying in many others. It has an eye opening message but at the same time is very heart warming especially for animal lovers out there. Netflix has struck gold once again.