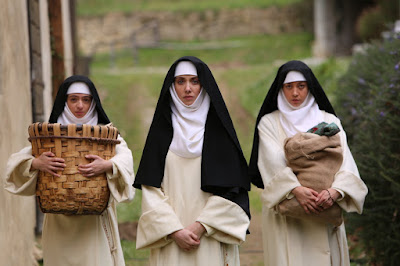 Making a comedy that takes place in the Middle Ages can be a tricky thing. Everyone involved needs to be at the top of their game for it to work correctly. The Little Hours had all the right needs for it to succeed. Unfortunately for me it failed to live up to the expectations set by it's talented cast and great premise.

After getting caught being with his master's wife, a young servant named Massetto (Dave Franco) flees the castle to avoid any sort of punishment. He takes refuge at a convent filled with some interesting nuns. Father Tommasso (John C. Reily) is the first to find Massetto and comes up with the plan for him to pretend to be deaf and mute as to not draw any suspicion to himself. The young nuns of the convent are instantly attracted to Massetto and they must resist their temptations while Massetto must do everything he can to not blow his cover.

To me the worst thing you can do in a comedy is have the initial setup be great and then have the execution almost fall completely flat. There were definitely more things I had problems with than liked in The Little Hours. Comedy is certainly subjective but it felt like the majority of the jokes here just didn't work. Sure it's pretty funny hearing nuns shout obscenities at one another but when that's your biggest running joke it gets old after a while. A film that clocks in under an hour and a half should not have pacing problems either. It felt much longer than it needed to.

While the film isn't completely forgettable it does have some moments here and there where it does shine. The performances are pretty solid from everyone, despite not much landing in the way of jokes. Everyone in the cast is very committed to their roles. Aubrey Plaza and John C. Reily are definitely the standouts here but they aren't enough to raise this above being anything more than mundane.

The Little Hours boasts a strong cast who manage to get some chuckles out here and there but ultimately the film fails to produce any big laughs and suffers from feeling longer than its actual run time.