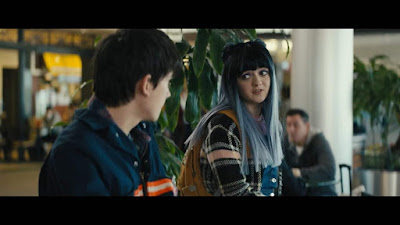 Then Came You stars Asa Butterfield (Hugo) as Calvin, a hypochondriac who work as an airport baggage handler with his brother (Tyler Hoechlin) and father (David Koechner). Calvin is a very timid and worrisome person whose whole life changes when he meets Skye (Maisie Williams) at a support group for people diagnosed with cancer. Skye is the complete opposite of Calvin, more outgoing and somewhat of a loose cannon. She enlists Calvin to help her fulfill her bucket list, or as she calls it her "To-Die List" before she passes on. Hesitant at first, Calvin agrees to help her out in hopes that it may bring some light to his down on his luck life.

There have been many of films to come out over the years with a lot of similarities to Then Came You. We've all seen the two strangers who meet and bond over a particular event or trait that they both share. Thankfully, everyone involved here does a great job at making this film stand out from the rest of the pack and prides itself in being a thoughtful look at friendship and heartache.

Director Peter Hutchings does a fine job at handling different tonal shifts throughout the film. It starts out as a sort of meet cute romantic comedy story and then slowly progresses into almost a full on drama at times. All of it feels natural for the most part, save for a few comic relief characters played by Ken Jeong and Briana Venskus that feel a little unnecessary. There are a few scenes early on that feel a little too rushed and makes the film seem like it may gloss over of a lot of the heartache that comes when dealing with cancer. Sure enough the direction and writing lift this above just a typical average flick of this genre.

It goes without saying that the strongest parts here come from the performances and that starts and ends with Asa Butterfield and Maisie Williams. Butterfield does a great job in the leading role. The chemistry he and Williams have would make this watchable enough even if everything else failed. Maisie Williams proves how great of an actress she truly can be. On Game of Thrones she is easily one of the best parts of that show and here it is no different. She puts forth a performance that will both make you smile and cry your eyes out by the time she's done. The rest of the cast here does well in their respective roles too. Nina Dobrev gives one of her better performances as a love interest for Calvin, Tyler Hoechlin and David Koechner are both great as the brother and father of Calvin and Tituss Burgess is definitely a scene stealer in the few scenes he has, although he does basically just play his character from Unbreakable Kimmy Schmidt.

Overall, Then Came You is one of the biggest surprises to come out in a while. It takes a fairly basic story and elevates it because of the talents involved. This is definitely one to seek out once it hit VOD and has it's limited run in theaters.