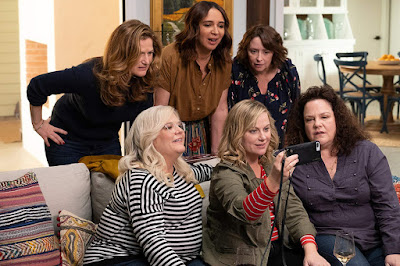 When six friends decide to take a trip together to celebrate one of their 50th birthdays hilarity ensues and tensions from the past make their appearance. Wine Country reunites four Saturday Night Live cast members (Amy Poehler, Maya Rudolph, Ana Gasteyer and Rachel Dratch) along with two writers (Paula Pell and Emily Spivey) who all worked on the show during the same era. Amy Poehler not only stars but also makes her directorial debut here in what ends up being a decent little comedy yet feels like a missed opportunity at the same time.

One of the best aspects of Wine Country is its cast. Since they've spent so many years together on SNL and have been real life friends for years it really brings out the relationships of the characters as it all feels very authentic. These ladies know the right way to bounce one-liners off one another and Poehler does a good job behind the camera getting the most out of these actresses. Even Tina Fey, who was on SNL in the same era as the rest of the cast, steals most of the scenes she shows up in as the owner of the house where the main characters end up staying.

While there are plenty of moments to laugh at and the cast does a good job there are a lot of things that don't end up working quite as well. With the history of this cast coming from a sketch comedy show there is definitely a lot of improv going on here. In fact most of the movie feels like it's all been improvised and there's not much of a script. Not to say these actresses improvising is a bad thing but when you rely so heavily on it there are going to be a lot of times where the jokes don't land. That happens about as many times as the jokes do work making for not the strongest comedy but a decent one to say the least.

A lot of the drama here is pretty weak. Not because of the cast it's just all subplots that always come up in movies like this. Each of the six main characters all have something going on back home and it all eventually comes out and that's when the conflict of the movie makes it's way to the forefront. It's all handled just fine but each character arch that comes up is just so cliche it makes them all completely forgettable. Jason Schwartzman makes an appearance here as Devon, who comes with the house. His character feels really unnecessary despite Schwartzman actually trying to do something with the material he's given.

All in all, Wine Country works more than it doesn't. When the jokes land they give genuine laughs and the cast is clearly having a good time all working together. It just feels like they missed out on something could have been considered a really great movie. Instead they just settle for something safe and it ends up being mildly entertaining.