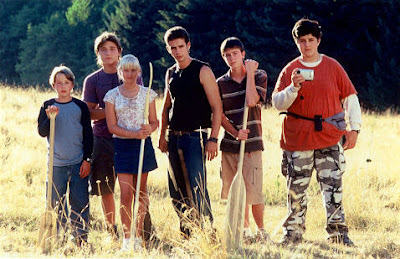 Mean Creek was released back in 2004. It had a very limited run in theaters so it didn't really get the chance to be seen during it's theatrical run. When it comes to indie films some get the right treatment and get a lot of exposure and others don't get much money put into getting the film out there for people to see. The latter is where Mean Creek falls and it's a shame because it is one of the best teen oriented films to come out in the early 2000's. Featuring a cast of, at the time, up and comers some of which have gone on to have pretty solid careers and the others for the most falling into obscurity.

The story follows Sam (Rory Culkin). Sam gets picked on at school by George (Josh Peck). George is a troubled boy who has consistently been bullying kids for quite some time now. After their last altercation, Sam's brother Rocky (Trevor Morgan) has had enough and decides it's time for them to get back at George. Rocky and his friends Clyde (Ryan Kelly) and Marty (Scott Mechlowicz) cook up a scheme that involves pretending it is Sam's birthday and they're all going out to the lake for a boat ride where they will do something to completely embarrass George. Sam's girlfriend Millie (Carly Schroeder) tags along for the ride unaware of what is to come. Certain events change the course of action and things don't go as planned leaving the teens to figure out what to do with their new situation.

Right off the bat, Director and Writer Jacob Aaron Estes does a great job establishing all of these characters. The audience gets just enough information about each one of them to really build their characters and gets you invested in the story to come. This is without a doubt one of the best films from it's time to portray teenagers in such a way that's not only believable but is able to make you care about each and every one of them. That's something that is not easy to do with younger actors and Jacob Aaron Estes handles it flawlessly.

A really amazing cast of young actors was put together for this film and each one of them gives a lot of weight to their performances. While everyone in the cast does a great job their are two definite standouts in the likes of Josh Peck and Scott Mechlowicz. Both play troubled kids and while both of their characters could have easily been played off as stereotypes both actors do such a great job that you really feel for the hurt that they've gone through. Despite having a little less screen time than the others Josh Peck puts his heart and soul into the role of George giving him so much depth than you typically see in a bully character. It's a shame that we haven't been able to see another performance like this from Peck since this film's release in 2004 but it definitely shows that he's got the acting chops to hang with the best of them.

There isn't much here to gripe about as the film has a steady pace and great performances to keep you invested. Had the run time been just a little longer we could have gotten a little bit more character development with each character which would have been nice to see. The character development we do get is still great it just would have nice to see a little more with each character. Even though all the characters are written well and the performances by the actors are great, the character of Clyde feels like he gets a little short changed. He's definitely given the least to do but Ryan Kelly still puts a lot into the role to make some kind of impact.

This is a criminally under seen film that still doesn't get anywhere near the credit that it deserves. It works as a great teen drama that feels more like a drama for adults rather than for teens. Performances, writing and direction are top notch all around and this absolutely something that you should seek out if you have yet to see it or have even heard about it.