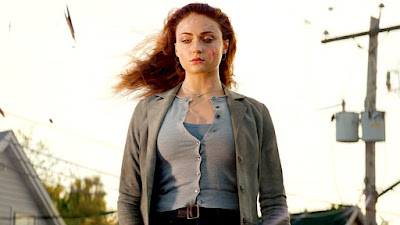 Dark Phoenix marks the final movie in the X-Men series produced by 20th Century Fox. This is a series that has definitely seen it's ups and downs but overall it's been slightly more positive than negative. X2 and Days of Future Past being the clear two best in the series and Apocalypse and X-Men Origins: Wolverine being at the bottom of the barrel. So the question is with Dark Phoenix being the last go around where does it fit in with the other movies in the series? Unfortunately, it may very well be the worst outing in the entire X-Men series.

We jump to the 90's this time around following the X-Men as they travel to space to save a crew of astronauts from their rocket. While saving them Jean Grey (Sophie Turner) gets stuck on the rocket ship and is exposed to a dark and ancient power. Once back on Earth she begins to show signs that this new power could be deadly, not just for the X-Men but for the entire world. This puts the X-Men in a situation where they must decide do they save their friend or stop her from destroying humanity.

This movie had a lot going against it before it was even released. With Disney buying out Fox, having to do re-shoots and having issues with actors on set it almost seemed like this was doomed from the start. Simon Kinberg takes over as director here. This is the first time he's directed a movie but he has been the writer for the last two movies in the series. Having written the last two movies as well as The Last Stand you would think Kinberg would have a pretty good handle on this franchise. That's not the case here as his lack of experience directing is definitely a weak point as this story never really gets a chance to get off the ground.

A lot here feels very rushed almost like they were ready to just get this out and be done with it. Some scenes are awkwardly edited and one of the worst aspects is how a lot of the characters are underutilized. James McAvoy, Michael Fassbender, Jennifer Lawrence and Nicholas Hoult are the only actors here who have been in all four of the newer run of movies. McAvoy is the only one who really gets anything to do but it really feels like he's ready for this series to be over. Fassbender and Lawrence are completely wasted and Nicholas Hoult get a little more than them but still feels like he doesn't have as much to do. Even characters like Quicksilver (Evan Peters), Storm (Alexandra Shipp) and Nightcrawler (Kodi Smit-McPhee) all kind of fade into the background and never really get their moments to shine.

Obviously with the movie mostly revolving around Jean Grey she's going to get most of the screen time. Sophie Turner does a decent job in the role but her character is never fleshed out enough to ever really care about what's going on around her. They continue to try and force the relationship between her and Scott Summers (Tye Sheridan) just like they did in Apocalypse but it still doesn't really work. All that aside, nothing makes this movie worse than the villains. An alien race, led by Jessica Chastain, that wants to use Jean Grey's new powers to destroy the world might be one of the worst team of villains in a comic book movie ever. It's never really explained where they came from or why they want to destroy everything, they just kind of show up because needs a villain outside of Jean Grey.

There are moments here and there that are genuinely good and the final battle that takes place on a train is actually a really well done fight sequence. The problem is they are just too far and between one another. This being the last film in this iteration of the X-Men just feels like the studio needed to put something out and they didn't really care what it was or if they did it justice. It's a shame because this is a franchise that had the potential to be better than what it was and sadly it will most likely be remembered for the last two movies being failures and the few movies that were actually good not getting the credit they deserve.