The Art of Racing In The Rain: Review 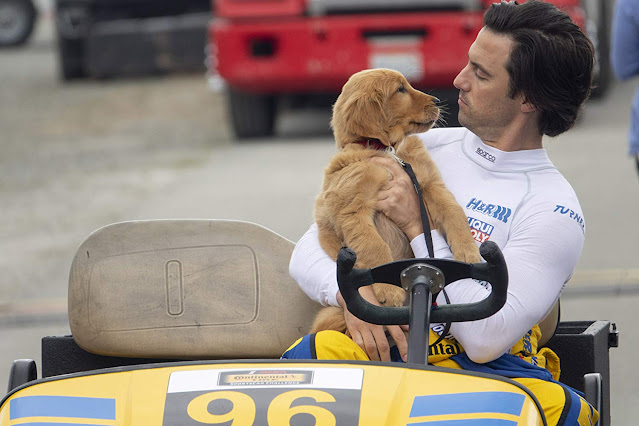 The Art of Racing in The Rain is the latest movie in the trend of following a dog as the central character as he narrates throughout his life. While the movie plans on obviously tugging at the heartstrings of it's audience it still manages to put together a thoroughly enjoyable story overall. In this movie we follow Enzo (voiced by Kevin Costner), a golden retriever with a heart of gold who lives our his days with his owner Denny (Milo Ventimiglia). Denny is a Formula One race car driver and he frequently takes Enzo to the track with him during his younger years. The story continues on as Denny falls in love with a girl (Amanda Seyfried), they have a daughter together and over the years Enzo and Denny go through many ups and downs while managing to keep their strong bond in tact.

It seems like every year studios try to put out a new movie that features a dog as it's central character or has a dog play a major part in the story. Most of the time they all typically hit the same beats and go through the same motions and that is something that this particular movie does suffer from. There's nothing new here. This is a movie that you have seen many times before and as you watch it you can pretty much predict what's going to happen in the next scene constantly throughout. That's not to say that all of the predictability brings the movie completely down but it would have been nice to see a movie like this try something new or do something different than what's expected.

What keeps the story moving and makes this worth watching is the relationship between Enzo and Denny. Milo Ventimiglia gives one of his best performances and really makes you feel for his character. The dog that plays Enzo for the majority of the movie absolutely steals the show. It's hard to say that an animal gives a good performance but here this dog really does put it all out there. On top of the dog's performance you've got Kevin Costner providing his voice and it ends up being a perfect choice. In the beginning it seemed like Costner wasn't going to be the best choice for the dog but he ends up giving a lot of depth to the character.

The rest of the supporting cast here is fine but none are given a whole lot to do outside of Milo Ventimiglia and the dog. There are many moments that will have you tearing up and that's to be expected in a movie like this. You can make a good assumption on where the story ends up but some of the more dramatic moments in the middle of the movie weren't quite as expected which was nice to see it add a little more depth to the story. One scene in particular has to be mentioned because it is the only part of the movie that almost brings it to a halt. There is a part where Enzo has a hallucination and the scene is just so bizarre that it feels very unnecessary. Thankfully it doesn't last very long and the story moves right along but that scene just felt like it didn't belong.

In the end, The Art of Racing in The Rain is a perfectly fine movie. While it doesn't provide anything new to this genre it does enough to get by and make it enjoyable. The relationship between Enzo and Denny is as sweet as can be and is the highlight of the movie. Get the tissues ready because this story is designed to have you tearing up by the end.