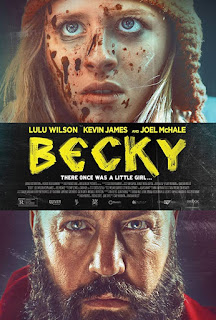 It is always nice to see an actor who is mostly known for their comedic performances want to venture out and try their hand at something different. Just last year we saw Adam Sandler give one of the best performances of his career in Uncut Gems and now one of his best friends in Kevin James is trying his luck at a role that is unlike anything he's ever done before. Should James stick to his usual comedy routine or does he have the chops to play more nasty villain roles?

Becky follows the story of a young girl, played by Lulu Wilson, who is traveling with her dad Jeff (Joel McHale) to their lake house for the weekend. To her surprise her dad has also invited his girlfriend Kayla (Amanda Brugel) and her son Ty. This doesn't go over well as Becky is still not over the loss of her mother who passed away just a year ago so she sets off into the woods with the family dogs. Things get worse from there when a group of convicts, led by Dominick (Kevin James), take the family hostage. Now Becky must take matters into her own hands to save her family from these deadly men.

Take a little bit of Home Alone and mix in a lot of violent 80's B-movies and you get Becky. There is a lot of potential here and while the overall movie does fall short of reaching it's potential it still is a fun and entertaining ride. The initial setup to the story is handled very well. Getting to meet Becky and her dad, seeing their relationship and watching Becky struggle to accept her dad moving on from her deceased mother adds some great character depth. Even when the movie's villains make their arrival to the house and start taking them hostage the intensity begins and you wonder what's going to happen next. Once the blood starts flowing is when things go off the rails, for better and for worse.

This is an extremely bloody and gory movie, to the point where it's basically exploitation. Not to say that any of the blood and gore takes away from the movie but at times it does feel like they rely on it just a little too much or drag on scenes of torture when they could have been cut short. Most of the violence plays into a lot of the entertainment in the movie as you watch this teenage girl fight these convicts, pretty convincingly, so she can save her family. Lulu Wilson is a breakout star here. She carries the movie very well and plays a psychotic, angry teen perfectly. Kevin James does a solid job as the main villain here. He never is quite as menacing as you'd like him to be and his character isn't written all that well but he does what he can with the material. Joel McHale also gives a pretty decent performance as the dad. Nobody else in the cast is necessarily bad but they really aren't fleshed out or given much to do.

In the end, Becky plays out like a good midnight movie. It's got a good enough setup and plenty of blood and action to stay interesting. The first half holds up better than the second half and doesn't reach it's full potential but it does have enough going for it to make it worth a watch.
Rating: 6/10