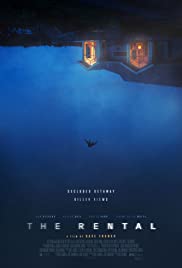 First time director Dave Franco has put together something more than your average thriller with The Rental. We follow two couples; Charlie (Dan Stevens) & Michelle (Alison Brie) and Josh (Jeremy Allen White) & Mina (Sheila Vand) as they rent a vacation home for the weekend. Both couples look to enjoy a nice relaxing weekend but they grow suspicious of the homeowner when not all is as it seems at the house. Along with that secrets from the couples start to come out and cause friction among everyone. They start to see each other in a new light as they try to discover the secrets of the house.

For a first time director Dave Franco, who is usually known more for his comedies, shows a lot of chops behind the camera. He's able to take a simple premise and flesh it out enough to make it quite entertaining. The film is marketed as a thriller, which it very much is, however it also works as a character drama as well. We spend around two thirds of the film watching these characters and their relationship issues grow more and more while something more sinister lurks in the shadows. Franco is able to balance both elements very well as it leads to an extremely frantic final act.

With the cast being rather limited it takes some good performances to elevate this to more than something average. Franco and co-writer Joe Swanberg (Drinking Buddies) invest a lot of time in these characters. They all are very flawed individuals but they all feel like real people. This isn't your typical thriller or horror film where you have a bunch of characters that are meaningless and you are just waiting for them to die. You genuinely care about these characters and want to see them make it through the situation at hand. All four main actors here give good performances to go along with the solid writing behind them. None of them particularly stand out over the others, although Alison Brie continues to shine as she does in everything.

With a tight script the film doesn't linger around longer than it needs. The film is able to get in and get out without a lot of fuller. It's nice to see a thriller nowadays take some chances and try some new things. Seeing what Franco has done with The Rental is very reminiscent of what Jordan Peele did with Get Out and Us. Not that The Rental is like those films in terms of what it puts on screen but Franco has done a very surprising job at jumping from comedies right into making what is easily one of the best thrillers of the year.

In the end The Rental succeeds on multiple levels. Its got a great cast, good performances all around and does a great job at building tension and making you wonder what is going to happen next. Dave Franco proves himself as a director here and shows he definitely has a career in making thrillers and horror films.