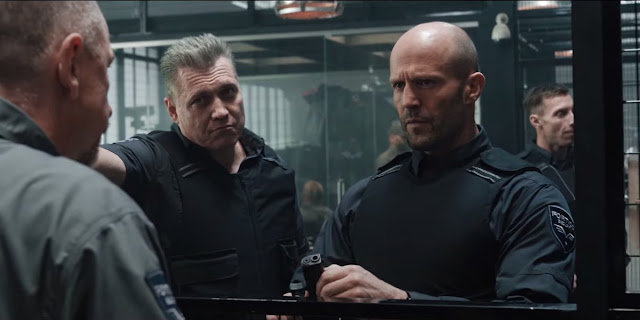 Another year goes by and here we have our annual Jason Statham action movie. You generally know what you’re getting into with one of his movies but nonetheless he’s got some that are rather enjoyable. Thankfully, Wrath of Man falls into that category and ends up being one of Statham’s most entertaining movies in quite some time.

We follow Statham as a character named simply H. He’s a mysterious figure who works for a cash truck company that moves hundreds of millions of dollars around Los Angeles each week. During a routine day a group attempts to rob the truck causing H to take matters into his own hands and eventually stopping the heist. This causes all of his co-workers and everyone at the truck company to question who he really is and why he joined their company. His motive becomes clear as we watch him attempt to settle a score that’s been taking place over a several month period.

Director Guy Ritchie is no newcomer to the action genre. He knows all the right steps in making something competent and putting it on screen. With Wrath of Man he does a great job crafting this story and letting it play out with excellent execution. Giving a character like H a lot of depth and motivation keeps the audience invested and you really want to see him succeed in his mission. A lot of that depth can be attributed to Statham’s performance here which is arguably one of his best in recent memory.

Statham is a guy that definitely gets typecast a lot but he has a particular type of character that he likes to play and he generally plays that character quite well. Anytime he teams up with Guy Ritchie, Ritchie always seems to get the best out of him and here is no different. While H is a character that Statham has played more than enough times in his filmography, he still has a certain presence and charisma that he brings and it’s a real treat to watch here.

The rest of the cast is made up of solid character actors that all do well in their respective roles, with the exception of Scott Eastwood who always just feels like he’s trying a little too hard. Special shout out to Holt McCallany who does a great job playing the character Bullet and it is always great to see Josh Hartnett when he decides to pop up in something new. There is some intense and edge of your seat moments here during most of the action set pieces. It all leads up to a big finale with plenty of head shots to satisfy even the most casual action fans.

In the end, Wrath of Man is a well-made and slick action movie with solid action, good direction and a great performance from Jason Statham. Some points get a little sluggish as the story jumps around between different points in time a little too often and it would have been nice to see a few more of these characters fleshed out more. Despite it’s few shortcomings this is definitely a movie worth seeking out.