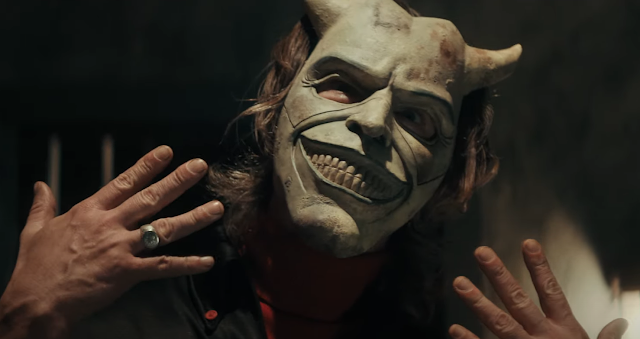 The Black Phone is the latest movie from Director/Co-writer Scott Derrickson and his writing partner C. Robert Cargill. While also teaming up for the first Doctor Strange, Derrickson and Cargill were the minds behind the 2012 hit Sinister, as well as its disappointing sequel. There is a definite style these two have on their projects together and its no surprise that The Black Phone shares some similarities to Sinister, however they both can stand on their own respectively. It’s still early but it should be safe to say that The Black Phone is one of the best horror movies of 2022.

We follow Finney (Mason Thames), who is a 13-year-old growing up in a small town in 1978. He lives at home with his father (Jeremy Davies) and sister Gwen (Madeleine McGraw), his mom has unfortunately passed away at this point. Finney is a quiet kid that kind of keeps to himself while Gwen is the more outspoken of the two who isn’t afraid to show her true colors. The town they live in is currently in trouble as they’ve had someone kidnapping children, known as The Grabber (Ethan Hawke), leaving all the kids in terror any time news comes out when another one has been taken. After a run in with The Grabber, Finney finds himself locked in a soundproof basement with nothing but a bed, toilet and an old phone. He starts to receive phone calls from The Grabber’s previous victims as they try to help him escape.

First and foremost, Director Scott Derrickson does a great job here putting this tale together. Derrickson is no slouch to horror, and he knows all the right beats to hit to get the job done. There are many tense scenes and a real sense of dread. While this does dip into the supernatural a bit this story is so engaging because it is something that could truly happen and that’s the scariest part of it all. If you have kids one of your biggest fears is something happening to them that is out of your control and for kids, getting kidnapped is probably at the top of all fear lists. The terror that comes from a situation like this is something Derrickson captures quite well and completely gets you invested in these characters.

As far as the cast goes everyone here is really bringing it. There are many child actors that make up most of the cast and all of them give good performances. Everyone is going to be talking about Ethan Hawke and his performance, which they should because this is up there with some of his best performances, but nobody should overlook Mason Thames here. This is his movie, and he carries it very well for a young actor. Madeleine McGraw as Gwen almost completely steals the show. Every scene she is in she is just oozing charisma and adds a nice dose of comedy that is very much needed here. Ethan Hawke is menacing as The Grabber but adds some vulnerability to the character that was unexpected. This performance encapsulates everything good about Hawke as an actor and he is really bringing it in a way I haven’t seen from him in a long time.

If I had anything negative to say about the movie is that I’m not sure how some audiences will take the supernatural aspects. Personally, I think they are blended well into the story and Derrickson uses a unique way to utilize them to his advantage. Despite my enjoyment of it I feel like casual audiences will either be confused or turned off by some of the sequences. This is also a hard watch for anyone who has issues with kid violence. Not only are kids killed here but there are a few extremely violent fights between kids as well as a scene with someone whipping their child that may turn off some viewers.

Overall, The Black Phone is one of the best horror movies of the last five years. The story mixed with a sense of dread and terror throughout make this incredibly enjoyable. Mason Thames, Madeleine McGraw and Ethan Hawke all carry this movie and give some truly great performances. This is highly recommended for anyone looking for a good horror/thriller.