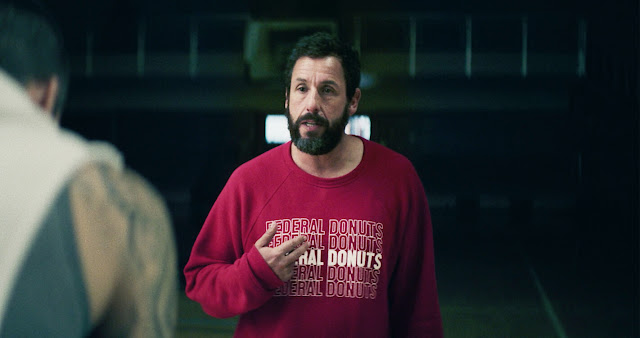 Anytime Adam Sandler can step outside of his comfort zone and put out a drama it will generally turn some heads. Here is no different as Sandler gets the opportunity to make a movie about one of his favorite pastimes, the game of basketball. Surprisingly this is under his Happy Madison Productions, which is typically where all his comedies come from, but this is the first venture into dramatic territory for the company and it passes with flying colors. Director Jeremiah Zagar takes a rather formulaic underdog story and elevates it to where the movie stands out on its own.

Hustle follows Adam Sandler as Stanley Sugerman, former NBA player turned scout for the Philadelphia 76ers. Stanley has been on the search for the next great thing to bring to the NBA. After a failed attempt that was drafted by the team’s new co-owner Vince Merrick (Ben Foster), Stanley is sent back out to see what talent he can find. While overseas he comes across an insane amount of talent in local construction worker Bo Cruz (Juancho Hernangomez), a player that’s not on anybody’s radar and would be the perfect piece to add to the 76ers. After some convincing, Stanley is able to get Bo to come with him back to Philadelphia so he can give him a shot at the NBA.

As far as sports movies go Hustle is right up there with some of the best. It takes a very familiar story and makes you invested not only in the story itself but the characters as well. The biggest strength of the movie is the chemistry between Adam Sandler and Juancho Hernangomez. Watching Stanley throughout you can really see how much he genuinely cares about Bo and wants to help him better his life and that is a testament to how good of a performance Sandler gives here. When Sandler gives it his all he really does shine and here is no different. He gets a chance to show off his dramatic chops but still gets moments to show off some of his comedy as well. While not necessarily the best performance, Juancho Hernangomez does bring a lot of charisma to his role of Bo and for a first-time actor he pulls it off quite well.

The rest of the cast is peppered with plenty of current and former NBA players, coaches and so on. Queen Latifah is a nice surprise as Sandler’s wife here. Probably one of the more interesting love interests for Sandler but they do play off each other well and you get a nice feel for their relationship. There is a lot of basketball action throughout and even though it’s mostly practice games and training montages it’s all shot well. Things are nicely paced here, and you never really feel the almost two hour run time.

If there was anything to complain about it’s the predictability. With this being an underdog story, it is easy to see where things are going to go but that doesn’t hold the movie back in any way. There isn’t really a bad performance here, however I will say I’ve seen better from Ben Foster who is the only one that feels like he’s phoning it in just a bit. Even Robert Duvall, who only gets one scene, feels like he’s doing more than Foster ends up with.

In the end, Hustle is a good rags to riches story that is elevated by a great performance from Adam Sandler. First time actor Juancho Hernangomez does well playing off of Sandler and his basketball expertise are put to good use through some exciting basketball scenes. This is highly recommended if you’re looking for a good sports movie.