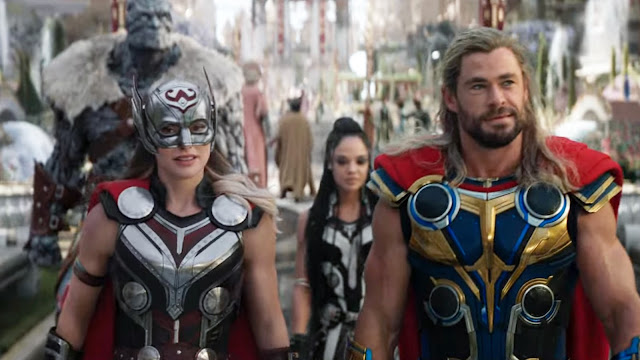 Everyone’s favorite God of Thunder is back for his newest solo adventure. This time around Thor (Chris Hemsworth) has a lot on his plate with the threat of a new villain in the form of Gorr the God Butcher (Christian Bale). Gorr has been deceived by a God that he was a disciple for in the past and is now seeking revenge on all Gods after losing his daughter. After New Asgard is attacked Thor enlists the help of Valkyrie (Tessa Thompson), his friend Korg (Director Taika Waititi) and his ex-girlfriend Jane Foster (Natalie Portman), who now has the power of Thor and can wield his former hammer Mjolnir.

Thor: Love and Thunder is the fourth movie in Thor’s solo outings and continues with the same style and direction as Ragnarok. Director Taika Waititi returns to helm Love and Thunder and brings he unique vision to the character once again. Waititi was a large reason as to why Ragnarok was able to let the character of Thor really flourish and shine on his own. The first two movies relied too heavily on trying to be Shakespearean and for the most part they didn’t work. Waititi’s style of direction blends well with the world of Thor and shifting to his brand of comedy has been a highlight of Ragnarok and now Love and Thunder.

With the recent outings from the Marvel Cinematic Universe there has been a lot of focus on connecting universes and showcasing new and old characters in the form of cameos. Respectfully, those movies were fine on their own, but we don’t get any of that in Love and Thunder and honestly, it’s a nice breath of fresh air. This is the first time in a while we’ve gotten a rather straightforward story that wasn’t mostly relying on nostalgia or shocking the audience with what characters may or may not show up. Thor has an issue; he recruits his team and they set out to fulfill their mission. Couldn’t be any simpler than that.

Ragnarok took a lot of chances at being weird and zany and we get no shortage of that here as well. It works for the best though as allowing these characters to be weird and outlandish is when we see them at their best. Thankfully, Waititi is able to balance the zaniness with a lot of heart that I was expecting to see. There are some great character arcs that take place here and where they end up, I did not see coming. The relationships between our main characters are a strong aspect of the movie. It’s nice to see Thor and Jane back together and we get to see how their relationship originally ended which we only knew about before because of a couple lines in the last movie. Adding in Valkyrie and Korg as a part of their team makes for one of the better oddball groups to come out of the MCU.

The cast is all top notch. Chris Hemsworth continues playing Thor with so much charisma and charm that it’s impossible not to love him. Natalie Portman gets a lot of heavy lifting, no pun intended, as Jane has arguably the best character arc and she plays it with a lot of heart. Tessa Thompson as Valkyrie is good once again although it would have been nice to have her character get a little more to do. We do get a small dose of the Guardians of the Galaxy, but it is very short lived and almost feels like they could have been left out altogether. Most surprising is Russell Crowe as Zeus. He gives a performance we have never seen from him before. I’m still trying to decide if he’s good in the movie or not as his character is so bizarre that is completely catches you off guard. Finally, there’s Christian Bale. Bale is without a doubt in the top tier of MCU villains. While not quite the best he certainly makes his presence known and is very menacing as Gorr the God Butcher.

Overall, Thor: Love and Thunder may go down as the best solo Thor movie. With an engaging story, the right amount of heart and a worthwhile villain it hits all the right beats. It really is amazing to see Taika Waititi completely turn around this character and the franchise and give it new life. If you’re a fan of Thor and the Marvel Cinematic Universe this is one, you’re going to want to see.