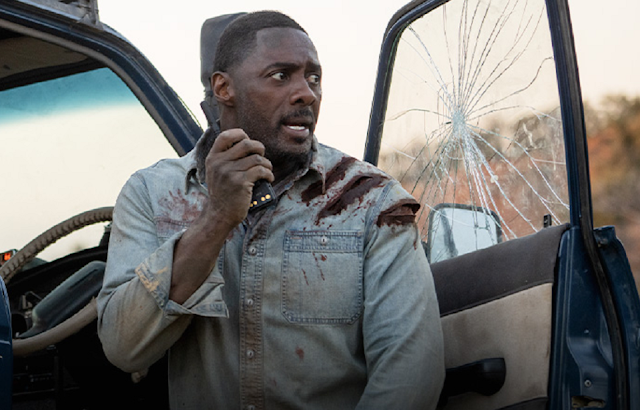 What would you do if you and your family were stuck in the territory of a ferocious lion? For Dr. Nate Samuels (Idris Elba) and his daughters Meredith (Iyana Halley) and Norah (Leah Jeffries), they find out very quickly that it is not an easy situation to be in. While in South Africa the Samuels and their friend Martin (Sharlto Copley) find themselves in the hunting grounds of a rogue lion that doesn’t want anything invading its territory. With their car crashed and not knowing when the lion will strike again the group does everything they can to survive.

Beast tries hard to be more than the typical man vs. nature outline but unfortunately ends up being just that. That’s not necessarily a bad thing but there really isn’t anything new here. With that being said there is plenty to enjoy. This is an extremely tense movie as you never know when the beast will make his next appearance. It’s set up like a theme park attraction with plenty of jump scares to get you popping out of your seat and gripping your arm rest.

This is a beautiful looking movie. Being shot in South Africa you get a lot of beautiful scenery and the cinematography here is amazing at times. There are many single take sequences that add so much more to a few scenes and really elevates the intensity throughout. The pacing here works well as the movie doesn’t overstay its welcome. That doesn’t leave much in the way of character development, but they give enough exposition in the beginning to make it work.

As for the beast himself the CGI used does go back and forth. At times it looks great but there are a lot of times when it looks questionable, and it becomes distracting. There are a few other lions that appear, and the CGI used for them is fantastic, however those lions don’t get into much action so they are easier to animate I would assume. During some of the action scenes there are some character decisions that don’t make much sense but in a situation like this it is hard to say exactly how someone would act so it doesn’t necessarily take you out of the movie.

There are not many characters in the movie but everyone in the main cast does do a good job in their roles. Idris Elba does a fine job as the lead here. Even in some of his lesser movies he has always given a solid performance. It’s nice to see Sharlto Copley pop up in another movie. He steals essentially every scene he is in as one of Elba’s long-time friends. Most surprising are Iyana Halley and Leah Jeffries as Elba’s daughters. Thankfully, neither one of them suffer from annoying kid syndrome and they both add a lot to their scenes.

Overall, Beast is essentially Jaws meets Jurassic Park. It provides a tense and fast-paced roller coaster ride with good performances, great action set pieces and some fantastic camera work. If only it could have done more to separate itself from other movies that are similar it could have been one of the better man vs. nature movies.