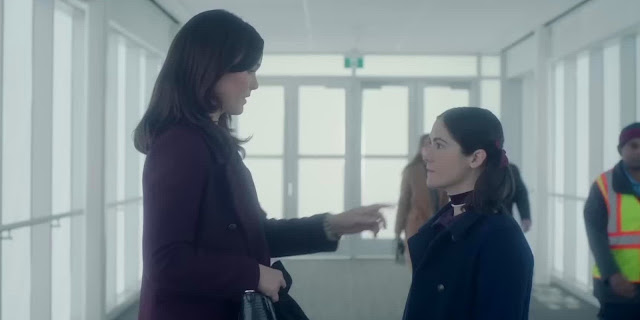 Back in 2009, Orphan hit theaters and was met with mixed reviews but was able to cash in on almost $80 million worldwide. The movie is well remembered as having one of the craziest twist endings of all time. Now we jump forward and we now have Orphan: First Kill which is a prequel to the '09 hit. This time Leena (Isabelle Fuhrman) breaks out of an Estonian psychiatric facility and decides to head to America. She is able to do this by impersonating the missing daughter of a wealthy family named Esther. The family is glad to have her back after losing their daughter four years prior, however there may be more going on in this house than "Esther" realizes.

Let's go ahead and put it out there, this movie is insane. Even more so than the first one, Orphan: First Kill goes off the rails multiple times and it makes things so enjoyable. While Director William Brent Bell doesn't have the best track record as a filmmaker he does put together a fun and gory ride. This does hit a lot of the same beats as the first one but is able to stay more consistent with its more over the top moments and when things get crazy they crank it up to an eleven and never look back.

While not everything works there is plenty of moments that will make your jaw drop and make you do a double take. There are some great kills throughout, would have liked to have seen a few more but what we do get works well. Everyone knows there has to be some kind of crazy twist after the first one having one of the all time twists. The twist that happens here, while not as shocking as the first one, actually works better than expected. Once the twist is revealed is when the tension starts to ramp up and doesn't let up until the end.

Isabelle Fuhrman once again is fantastic as Esther. While it is hard to believe that a 25 year old actress is trying to play a little girl, Fuhrman still knocks it out of the park and they do a good enough job at making her still look young. Julia Stiles being cast seemed like an odd choice but she is the stand out in the cast. She is really bringing it and she gives a performance that we have never seen from her before. Things eventually become a Fuhrman vs. Stiles battle to see who can one up each other and it is the biggest highlight. The rest of the cast is fine but nobody holds a candle to the two lead actresses.

There are some aspects of the movie don't stick the landing. A few scenes have some less than stellar CGI from blood splatter to some questionable looking bodies. Some bad green screen shows up towards the end that is rather distracting. Both feel unnecessary but it may be a case of not enough money in the budget to make them look better. The middle part of the story does lag as there is a lot of time spent building up to the twist but they do provide some character development there so it's not a total loss.

Overall, Orphan: First Kill is batshit insane. It starts off with a bang and ends with a great finale. The twist works surprisingly well and the performances of Isabelle Fuhrman and Julia Stiles alone are worth giving this a watch.