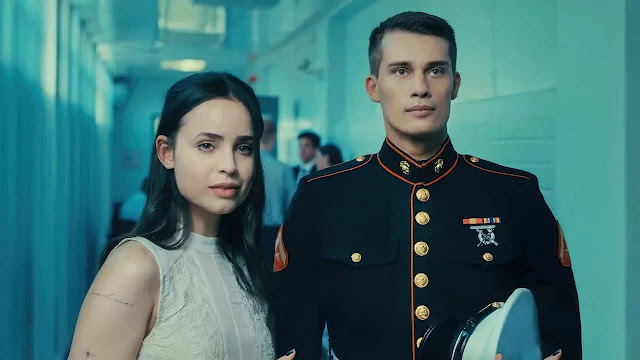 Purple Hearts follows Cassie (Sofia Carson), an up-and-coming singer/song writer who is also struggling with diabetes. It's getting to the point where her insurance won't cover her medication anymore and she can't afford it on her own. While at her day job at a local bar she runs into an old friend who is there with his Marine friends. She instantly has an issue with one of the friends named Luke (Nicholas Galitzine), who is also struggling with his own problems. He's a recovering drug addict and is in debt with his old dealer for a large amount of money. Despite being on opposite sides of the political spectrum and not getting along in any way, shape or form they come to an agreement where they will get married so they can take advantage of the healthcare for Cassie's medication and Luke will make more money so he can pay off his debt. All seems well enough until a tragedy interrupts their lives.

Over the last few years Netflix has put a lot of time into producing a plethora or romantic comedies and romantic dramas. The biggest problem is they are churning these out what feels like a couple times a month and they all are either rushed or are so by the numbers that it's hard to tell them apart. Purple Hearts, unfortunately, is no different and falls into the category of a low-grade romantic drama. This is the perfect example of a movie just not being able to execute on anything. Every scene feels hollow and there are hardly any moments that feel earned. It tries to pull at your heart strings in just about every scene and by the end of this two hour and two-minute movie it is more than tiresome.

When you're putting together a romantic movie it helps when you have leads that at the very least have good chemistry together. There is no chemistry to be found anywhere. Both Sofia Carson and Nicholas Galitzine are flat in their performances, and not once do they ever give off a feeling where you would think they could end up together. The movie itself even sets up their personalities where they dislike each other so much that there is nothing that would ever make them turn around and start liking one another. Throw in some pacing issues and this feeling like it is a lot longer than its two-hour run time and you've got all the makings of a poorly put together movie.

The few positives the movie does have are too few and far between. Linden Ashby who plays Luke's father gives unquestionably the best performance in the movie. He's not in it enough but when he is there is at least a stronger acting presence. Also Chosen Jacobs who plays Cassie's old friend gives a solid performance as well adding some charisma that the two leads are sorely missing. There are some decent musical performances from Cassie and her band that add a little something here and there. It would have been nice to see more of that energy in Sofia Carson's performance but sadly we do not.

All in all, Purple Hearts is a weak attempt at showcasing two individuals setting aside their differences to come together to better their lives. While the story is actually an interesting idea the movie is brought down by the lack of chemistry between the two leads. The performances, with the exceptions of Ashby and Jacobs, are all lackluster and the movie never feels genuine in any way.