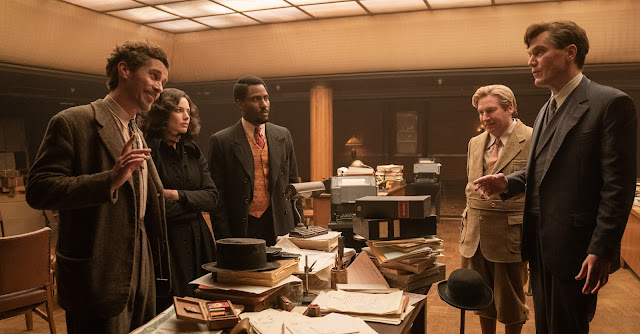 David O. Russell has had a pretty solid track record over the years. The last four movies he's directed have all been nominated for Oscars and while he has never been nominated for one himself he has still become one of the more competent directors over the years. He generally likes to work with big casts and an array of A-list actors to shotgun his movies. Amsterdam is his latest directed movie and boasts what is easily his biggest cast yet. While ambitious with its intentions, Amsterdam is unfortunately one of the most disappointing movies of the year.

In Amsterdam, we follow three friends; Burt (Christian Bale), Valerie (Margot Robbie) and Harold (John David Washington) as they get involved in one of the most outrageous plots in American history. Burt and Harold witness a murder and are framed for the killing of a young woman. They link up with Valerie and her brother Tom (Rami Malek) who gives them the advice to speak with General Gil Dillenbeck (Robert De Niro), a former general who worked with Burt and Harold's commanding officer in the army. The team tries to use Gil to help them clear their name and discover who is trying to set them up for the murder.

There is a lot to take in with Amsterdam and that is one of its biggest shortcomings. The movie tries to do so much that it ends up executing very little and eventually gets to a point where it can't redeem itself any further. With such a big cast and so many characters there just isn't enough time to give to everyone. Outside of the three leads everyone else in the cast is underused, some more than others, and the story spends so much time bouncing between everyone whether they add much to the story or not. This has always been a problem with star studded casts in that you have so many recognizable faces to bring in the audience but then you can't do enough with everyone involved that it all just feels poorly put together.

Russell tries to do what he can with the movie but his style of direction doesn't seem to work with this story. He makes some odd choices throughout and a lot of scenes come off rather jarring as they don't feel like they fit with other scenes. The tone is all over the place with some scenes coming off silly then when a serious scene comes along it just doesn't work because you don't know if it's supposed to be funny or not. There is nothing to really grab onto to make you care and with the terrible pacing it takes forever to get to the big reveal at the end and by that point the story has become so uninteresting that you just don't care anymore.

While the cast is large and not everyone gets too many moments to shine, the actors themselves all do put in good performances. Getting the bulk of the work are the three leads in Bale, Robbie and Washington. All three of them are great here and they do have quite a bit of chemistry with one another that at least gives you a little something to enjoy. Outside of them everyone else in the cast does what they can but not enough time is given to any of them to really make you care. There are some humorous bits with Mike Myers and Michael Shannon, Rami Malek puts in a solid performance and Robert De Niro brings a lot to his character, despite not getting a lot of screen time. The actors getting the short end of the stick are Chris Rock, Zoe Saldana, Timothy Olyphant and Taylor Swift. Swift however, is involved in one of the most unintentionally funny scenes in cinema in quite some time.

Amsterdam has good intentions but can't overcome a lacking storyline, odd choices in direction and a cast of too many characters. It has its moments here and there but with a run time that is over two hours there are not enough of them to make this worthwhile. This has Oscar-bait written all over it but will go down as one of the biggest letdowns of 2022.