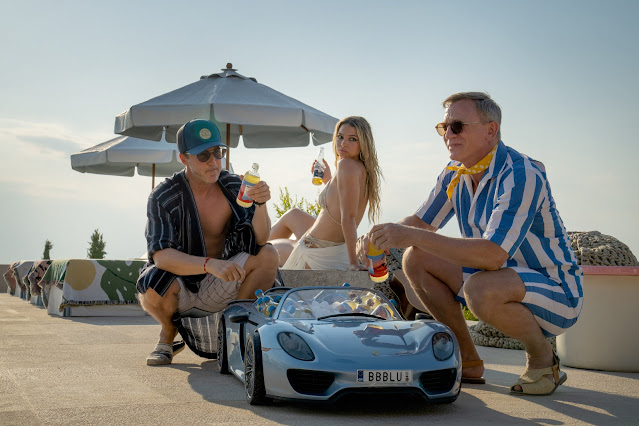 In 2019 Knives Out was released to critical and financial success. Director/writer Rian Johnson put together one of the best movies from that year and solidified himself as a top notch director and writer. Netflix bought the rights to release to more movies in the Knives Out universe. Enter in Glass Onion: A Knives Out Mystery. With only Daniel Craig returning from the first movie and a new cast of characters, does Rian Johnson manage to strike gold once again or does it suffer from sequel-itis and pale in comparison to its predecessor?

This time around we follow Benoit Blanc (Daniel Craig) as he is invited to a remote island owned by billionaire Miles Bron (Edward Norton). Miles has invited his close friends to his private island for a weekend party where he plans to have a murder mystery party in which all of his friends try to solve the mystery of his murder. Along for the ride is tech entrepreneur and Miles’ ex-partner Andi (Janelle Monae), Governor of Connecticut Claire (Kathryn Hahn), scientist Lionel (Leslie Odom Jr.), fashion designer Birdie (Kate Hudson), her assistant Peg (Jessica Henwick), Youtube star and men’s rights activist Duke (Dave Bautista) and his girlfriend Whiskey (Madelyn Cline). When one of them ends up dead Benoit must uncover some truths to find out which one is the killer.

Sequels are always something hard to come by. Many times, sequels are just a retread of the previous movie, and they usually don’t capture the same magic that made the first one so good. It’s even harder to have a sequel that doesn’t continue a story and instead introduces a new story and new characters. Rian Johnson has no problems going back to the Knives Out well and putting out another fantastic movie. Somehow, he manages to not only capture the magic from the first movie, but he actually improves upon it. Yes, Glass Onion is one of those rare sequels that surpasses the original and provides you with just the right amount of entertainment.

The comedy in Glass Onion is much more prominent than it was in the first movie. Knives Out had plenty of humor and was quite funny throughout but Glass Onion is laugh out loud funny from beginning to end. It has its tongue planted firmly in its cheek throughout the runtime, however the movie still does a good job handling the more serious moments as well. Rian Johnson does a great job balancing different tones and here is one of his best uses of it. There are so many little jokes at the expense of different actors and celebrities as well as a plethora of hilarious cameos peppered throughout the movie.

While Rian Johnson’s direction and writing are both top notch this movie wouldn’t be anything without this amazing cast. Daniel Craig sinks right back into the role of Benoit Blanc and he gives another stellar performance. They could twenty different movies with this character, and he would never get old. The rest of the large cast are all great in their roles respectively. Leslie Odom Jr., Kathryn Hahn, Jessica Henwick, Dave Bautista, Madelyn Cline and Kate Hudson are all great and they carry their performances very well. Outside of Daniel Craig, the standouts here are easily Edward Norton and Janelle Monae. Both actors manage to steal every scene. Norton is playing a very zany character while Monae is more on the serious side but they both knock it out of the park with their performances.

Glass Onion: A Knives Out Mystery is not only better than the original but it is the best movie of 2022. It gets everything right that the first movie did and adds onto it providing an even crazier movie that isn't afraid to wear itself on its sleeve. With so many great twists and turns, colorful characters, fantastic performances and many laugh out loud moments Rian Johnson has another hit on his hands.