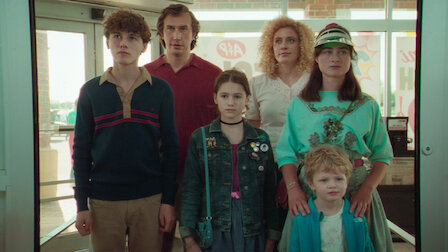 White Noise is the latest movie from director Noah Baumbach, who has had a rather successful career thus far. Baumbach brings a lot to the table this time around and unfortunately it feels as if he brought a little too much to make it work. This is a movie that tries to pack so much into it that ultimately it feels like not everything is executed well enough to be a success. That's not to say that there aren't things here to praise or enjoy, however the story and structure are so convoluted that it ends up being a disappointment.

There are moments throughout White Noise that will have you scratching your head. The story tries to give you a little bit of everything. It's a comedy, a drama, a thriller and even has a little bit of sci-fi and horror elements to it as well. Trying to juggle all of those elements just doesn't work here the way you would hope for. Baumbach's direction seems too disjointed, and it never feels like he's getting across everything he wants to. He's a competent director but here it's not enough to push the movie over the edge into greatness.

One of the biggest problems with White Noise, outside of the overstuffed plot, is the way the characters are written. The characters have a unique way of talking and interacting with one another that comes off as jarring at times. This movie is based off a book and the characters in the book may be written this way, but it doesn't translate well to the screen. Characters will have conversations with one another and never even be talking about the same topic and none of it feels natural. there are moments where the dialogue works well and the characters themselves are quirky enough to let some of it slide but the majority of it feels too awkward at times.

Some bright spots are definitely the performances. Adam Driver gives a great performance as the lead, Jack. He has a strong presence and delivers some of the more humorous moments of the movie. Greta Gerwig is great as Jack's wife Babette. Her character is one of the more outlandish parts and even though all of her story doesn't work she still gives it her all in the performance. Don Cheadle is fantastic as Jack's friend Murray. While he's not in it as much as he should be he definitely steals every scene that he's in. The rest of the cast from the kids of Jack and Babette to the other side character are do well in their performances. Everything about the movie looks great as well. It's all competently shot and has some great uses of color throughout. Be sure to watch all the way through the end credits as it has one of the best dance sequences and is actually one of the best parts of the movie.

In the end, White Noise ends up being more of a disappointment than not. While it does have some great performances and it all looks really good the convoluted plot and odd character moments keep it from living up to its full potential. There are some flashes of genius but not enough to make it all worthwhile.