Maybe I Do: Review 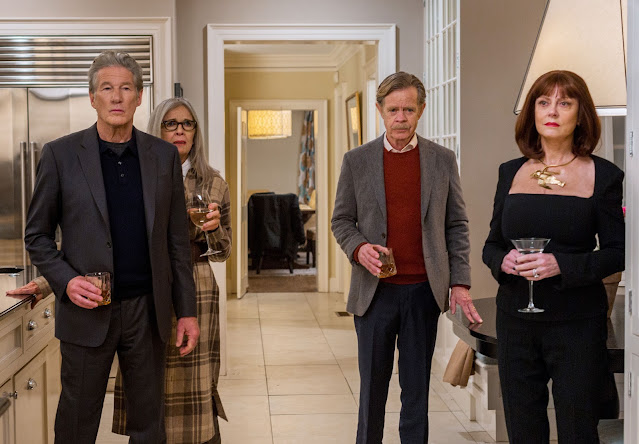 Maybe I Do follows Michelle (Emma Roberts) and Allen (Luke Bracey), they're in a relationship together and it seems like the next step is for them to get married. Michelle is sure she is ready for marriage while Allen doesn't know if he's ready yet, going as far as disrupting her from catching the bouquet at a friend's wedding. The two decide to finally get their parents together to meet for the first time. Turns out the parents already know one another well, which leads to some interesting opinions on the subject of marriage.

The story here is adapted from a play written by Director/Writer Michael Jacobs, most known for creating Boy Meets World. This marks the directorial debut for Jacobs and he does a fine job adapting his play to the big screen. Adapting his own work certainly helps his case and despite some definite flaws it's clear Jacobs has a natural touch for working behind the camera. Having an extremely talented cast bodes well too as it doesn't take much to get good performances out of the actors involved.

It's easy to tell this story was adapted from a play as everything flows the same way a play would. There are some establishing shots of the city and a few scenes that take place outside but for the most part everything takes place in just a few indoor settings making the story feel more intimate. A lot of the dialogue feels like it belongs in a play and at times feels like it takes something away from some of the more dramatic scenes. The performances of the cast help smooth over some of the inconsistent parts of the movie.

While everyone in the cast does a great job there isn't a standout performance from anybody. There are no weak performances and everyone brings enough to their characters to make each one interesting. The main part of the story is centered around Michelle and Allen but it's their parents that have the more interesting stories going on. A large portion of the movie focuses its attention on the parents rather than the kids which seems like an odd choice considering it's supposed to be their story. It feels like the story is missing something as it doesn't spend as much time with Michelle and Allen as it should.

Overall, Maybe I Do never does anything particularly bad but it doesn't feel like it ever lives up to its potential either. Michael Jacobs does well enough for his first time directing and everyone in the cast gives a good performance. It feels like the script could have used some punching up as the comedy comes off bland and the story loses some steam towards the end.